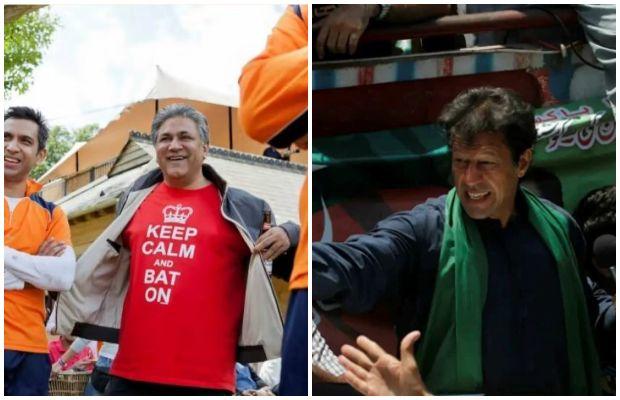 As the country awaits the verdict reserved by the Election Commission of Pakistan (ECP) into the PTI’s prohibited funding, the latest report exposes how a significant portion of its funding in 2013 was of foreign origin!

Exclusive story in @FinancialTimes: The strange case of the cricket match that helped fund @ImranKhanPTI's political rise. In the print edition on Friday. https://t.co/ACKHpsaFHC

The report claims that Arif Naqvi transferred three installments directly to the PTI in 2013 adding up to a total of $2.12m.

At the center of the saga is Wootton Cricket Ltd, a Cayman Islands-incorporated company owned by Naqvi.

The money from charity fundraisers, such as the “Wootton T20 Cup”, to bankroll PTI, report claims.

The FT report said, Naqvi, the founder of the Dubai-based Abraaj Group, one of the largest private equity firms operating in emerging markets back when the PTI was campaigning for the 2013 elections, hosted the cricket tournament at his country estate in the Oxfordshire village of Wootton from 2010 to 2012.

Naqvi invited cricket superstar Imran Khan and hundreds of bankers, lawyers, and investors to his estate in the Oxfordshire village of Wootton for weekends of sport and drinking, the report alleges.

The guests were asked to pay between £2,000 and £2,500 each to attend, the report quoting, Naqvi added that the money went to unspecified “philanthropic causes”.

“Funds poured into Wootton Cricket from companies and individuals, including at least £2mn from a United Arab Emirates government minister who is also a member of the Abu Dhabi royal family,” the FT report said.

FT claims that the emails seen for the period between February 28 and May 30, 2013, seen by the publication, reveal that both companies and foreign nationals, as well as Pakistanis, sent millions of dollars to Wootton Cricket after which funds were transferred to the PTI in Pakistan.

The report reveals that at the “Wootton T20 Cup”, over which Naqvi presided from 2010 to 2012, the main event was a cricket tournament between teams with invented names: the Peshawar Perverts or the Faisalabad Fothermuckers. They played on an immaculate pitch amid 14 acres of formal gardens and parkland at Wootton Place, Naqvi’s 17th-century residence.

The Veteran cricket commentator Henry Blofeld along with expert umpires and film crews attended the event. “You can choose to play in order to impress or make a fool of yourself, or alternatively just to be an innocent bystander,” Naqvi wrote in an invitation to the event.

Later $1.3 million was transferred from the account directly to a PTI bank account in Pakistan, on the same day.

tweet
Share on FacebookShare on TwitterShare on PinterestShare on Reddit
Saman SiddiquiJuly 29, 2022
the authorSaman Siddiqui
Saman Siddiqui, A freelance journalist with a Master’s Degree in Mass Communication and MS in Peace and Conflict Studies. Associated with the media industry since 2006. Experience in various capacities including Program Host, Researcher, News Producer, Documentary Making, Voice Over, Content Writing Copy Editing, and Blogging, and currently associated with OyeYeah since 2018, working as an Editor.
All posts bySaman Siddiqui