The vehicle carrying the law enforcers was targeted by terrorists when it was driving through Kuchlak bypass area, FC spokesperson said. 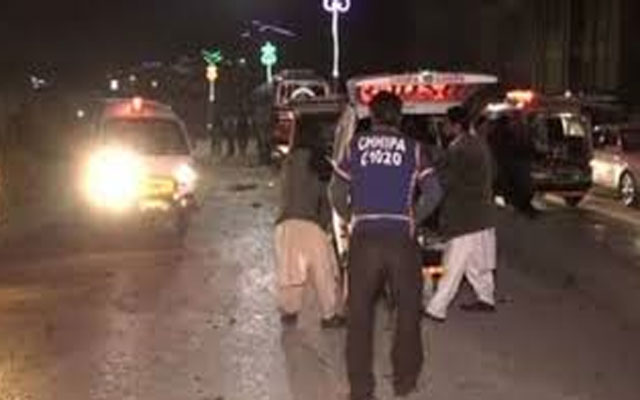 Three soldiers of Baluchistan Frontier Corps (FC) have been martyred and four other injured in a motorbike blast in Quetta on Friday.

As per the details, the blast occurred near a vehicle in Buleli area.

The vehicle carrying the law enforcers was targeted by terrorists when it was driving through Kuchlak bypass area, FC spokesperson said.

“Three FC soldiers were martyred on the spot and four others sustained critical injuries in the powerful blast,” police official said, adding that, around 8kg of explosives were used in the bike that was used for the attack”.

“Terrorists parked the explosive-laden motorcycle on the roadside and detonated it with a remote control,” said a police source.

After the blast, ambulances arrived at the scene and the injured were shifted to the nearby hospital.

After the incident, police and Frontier Corps (FC) personnel reached the scene and shifted the bodies and injured to Civil Hospital.

The police cordoned off the area as an investigation into the blast is underway. Meanwhile, no group has claimed the responsibility for the blast yet.

It is pertinent to mention here, this is the not the only blast that had taken place in Quetta in this week. On Monday, a bomb blast had injured nine people when a police van was targeted in the city.

The blast occurred due to explosive material planted in a motorcycle on Quetta’s Spinny road.

The provincial capital is witnessing a series of blasts targeting police vehicles. Last week, in an explosion at the city’s Double Road killed at least one person. Officials claimed that 10 others were injured in the same blast.