Brutal murder in Karachi; Woman goes to sleep after chopping off a dead man’s body

The horrific incident of murder in the flats of Saddar area of Karachi has spread panic among the citizens. 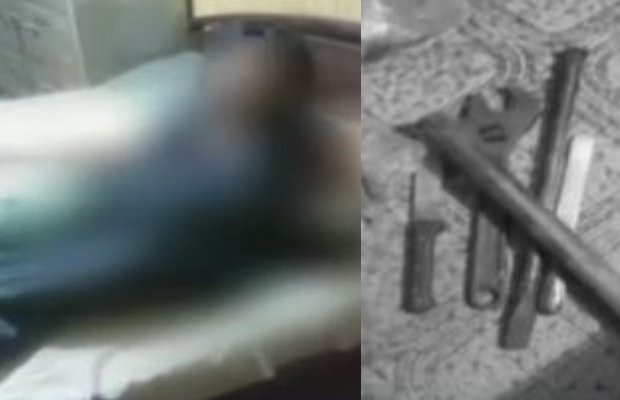 A brutal murder case was reported in Karahi on Friday as the woman went to sleep after chopping off a dead man’s body!

The shocking incident of murder was reported from the Saddar area of Karachi after human organs were found outside a flat.

A woman killed a 70-year-old man and dismembered his body, who was allegedly cohabiting with him for the past several years.

Police arrived at her flat after receiving complaints of a hand, other body parts being seen outside the flat.

When police arrived in her flat, the woman was sleeping in the other room “comfortably” while there was blood on her hands and clothes.

Police said it had collected evidence from the scene and took the accused woman into custody.

The horrific incident of murder in the flats of Saddar area of Karachi has spread panic among the citizens.

Preedy Police Station House Officer (SHO) Sajjad Khan said officials were informed about the murder at 3 am on Friday through the 15 helplines.

The police rushed to Ilaco House in State Life Building No. 5 off Abdullah Haroon Road.

The police found the man’s body, lying on the floor over a pile of old clothes, in an apartment on the building’s mezzanine floor.

“His head and hands were lying separate from the body in a nearby box,” the police official said.

“40-year-old woman was sleeping in another room in the apartment. She appeared to be intoxicated, the SHO said.

“According to neighbours, the two usually quarreled with each other over domestic issues, such as finances for various expenditures,” the SHO added.

The body was shifted to Jinnah Post-Graduate Medical Centre (JPMC) for autopsy.

According to JPMC Additional Police Surgeon Dr. Summaiya Syed, the victim’s head had been separated from his body and both his hands had also been cut off.

It appeared that the victim was first killed by using a hard and blunt instrument and was later hacked to pieces using a sharp-edged instrument or knife, as there were multiple other injuries on his body.

The examination of the arrested woman revealed that she was intoxicated and was very aggressive.

Officials have the victim’s son and other relatives, who live near Atrium Mall in Saddar, to complete legal formalities.