A rescue operation is underway in search of the missing people. 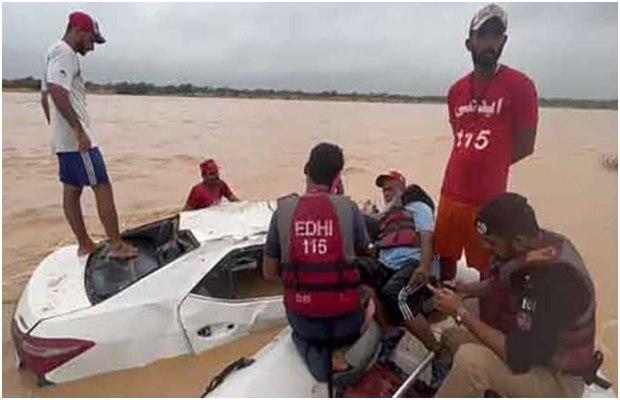 A child’s boy has been found, while 6 people of a family including the driver are still missing after a flash flood swept a car swept away into Karachi’s Malir River on Wednesday night.

As reported, the car that drowned in the Malir river at Karachi Highway Link Road was found on Thursday.

A rescue operation is underway in search of the missing people.

The family was returning to Hyderabad after attending a wedding in Karachi.

The victims’ relatives have been contacted in Hyderabad, who were left more than devastated to hear the news.

Flash floods and monsoon rains continue to wreak havoc across Sindh. The meteorological department has predicted more rains in Karachi.

According to a statement issued by the Memon Goth police, a Toyota Corolla, having registration number BGV-765 and carrying seven people including the driver, was swept away in the river at 8:30 pm yesterday.

“Today, the car has been pulled out of the Nadi (river) while the search for missing persons is underway,” the statement said, adding that the search operation was being jointly carried out by police and rescue teams.

According to the spokesperson of the Edhi Foundation, so far the body of Mohammed Moosa, 10, has been recovered.