Govt. passes a plethora of bills at the joint session of the Parliament

The three important bills included the use of electronic voting machines (EVMs), the Second Election Amendment Bill 2021, and the Kulbhushan Jadhav bill 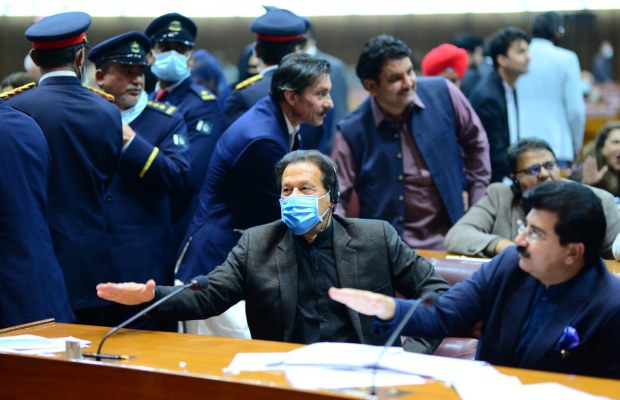 Three important bills including the use of electronic voting machines (EVMs), the Second Election Amendment Bill 2021, and the Kulbhushan Jadhav bill allowing him the right to appeal, were passed at the joint session of the Parliament on Wednesday amid the hues and cry of the opposition.

Adviser to Parliamentary Affairs Dr. Bbar Awan presented the bills related to the use of EVMs and the Second Election Amendment Bill 2021. These bills were passed with the majority.

As the bills were passed, the opposition started making hues and cry and tore the copies of the agenda. The Speaker NA tried to maintain the decorum of the house, but the opposition continued disturbing the house.

The two bills of the Muslim Family Laws (Amendment) Act, 2021, and the Anti-Rape (Investigation and Trail) Bill, 2021 were presented and passed during the session.

Hyderabad Institute for Technical and Management Sciences Bill 2021 will also be moved in the session which was also passed.


Earlier in the day, the joint session of parliament accepted the motion of tabling the Electoral Amendment Reforms Bill, 2021, defeating the Opposition by 18 votes but soon the process went into a recount on demand of  PPP.

Advisor on Parliamentary Affairs Babar Awan moved the motion during the joint session of Parliament on Wednesday. The motion seeking tabling of the Electoral (Amend) Reform Bill, 2021 was adopted by the house with 221 votes in favour and 203 against the move.

However, PPP’s Taj Haider objected to the counting of votes, pleading a recount. Speaker National Assembly Asad Qaiser while accepting his request ordered for the recount.

Ten members of the opposition remained absent while 6 treasury MPs were missing during the voting. The government defeated the opposition by 18 votes.