Imran Khan’s politics shifts from the Parliament to the Streets

PTI showed its street power tonight in various cities, massive gatherings in Lahore and Karachi in support of Imran Khan 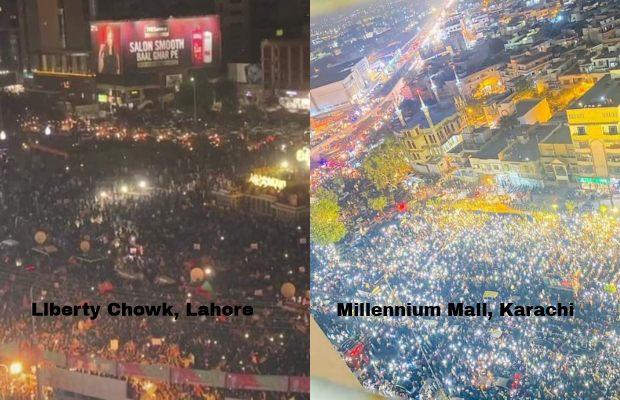 Imran Khan’s politics has shifted from the Parliament to the Streets!

The massive gatherings of PTI supporters are being reported from various cities on social media at the moment.

Taking it to social media, Imran Khan in a tweet thanked the people of Pakistan for taking to the streets in his support.

“Thank you to all Pakistanis for their amazing outpouring of support & emotions to protest against US-backed regime change abetted by local Mir Jafars to bring into power a coterie of pliable crooks all out on bail. Shows Pakistanis at home & abroad have emphatically rejected this,” he tweeted.


Thank you to all Pakistanis for their amazing outpouring of support & emotions to protest against US-backed regime change abetted by local Mir Jafars to bring into power a coterie of pliable crooks all out on bail. Shows Pakistanis at home & abroad have emphatically rejected this

Never have such crowds come out so spontaneously and in such numbers in our history, rejecting the imported govt led by crooks. pic.twitter.com/YWrvD1u8MM

A record number of PTI supporters were gathered at the Liberty Chowk in Lahore and at the Millennium Mall, Gulistan-e-Johar area of Karachi.

Shame on media seths and brokers for planned blackout of countrywide protests#RevolutionBlackedOut pic.twitter.com/ksS1bzH00w

Uffff, Karachi, Kamal Kar Diya!
Dear Chairman #ImranKhan, thank you for making us a Nation! What we are seeing across Pakistan today is a phenomenon, will never forget! #امپورٹڈ_حکومت_نامنظور#عمران_خان_نہیں_جھکاpic.twitter.com/TqyBQphj1W

Proud to be a part of history at liberty chowk tonight. Imran Khan, behind you my leader ❤ #libertylahore pic.twitter.com/5d5nILDOUd

Who cares for London Square When we have #Liberty market in #Lahore ❤️ pic.twitter.com/r8NYLtRUFS

This is not Liberty. It is from Center Point where ⁦@Dr_YasminRashid⁩ was speaking. And this was when we were leaving the protest around 11:45. Look at the participation of women & children… pic.twitter.com/UVVJk50PqY

Revolution in works for #ImranKhan! Every city of Pakistan is mobilized. pic.twitter.com/KLAjCWv8s5

People on the roads in Mardan, KP on Imran Khan’s call – 11 pm tonight.

Imran Khan is not even there yet… pic.twitter.com/L8aanckjZL 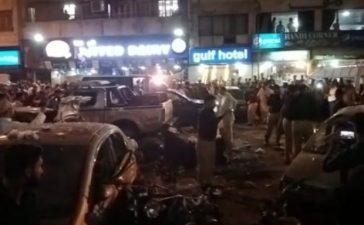