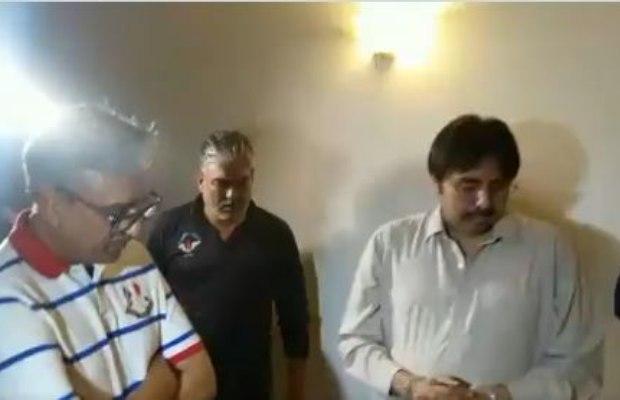 The raid was carried out under the supervision of a senior superintendent of police (SSP).
While Shahbaz Gill was also brought to the location in handcuffs.

As reported, the police recovered a loaded pistol, foreign currency, a mobile phone, satellite phone, and USBs have also been recovered from the room.

Moreover, Gill’s wallet, which was missing, is also reported to have been recovered in which two of his CNICs were also found, including two passports as well.

As per the news source, said Parliament lodges room being used by Shahbaz Gill is allotted to Senator Abdul Qadir.

The source also claimed that the police carried out the raid to recover the script that was read by Gill on the news show of a private TV channel.

Gill told journalists present on the spot that he had no clue as to why his wallet was found in the room,

Gill also claimed that he had left it in the car when he was taken into custody.

“My wallet was usually carried by my driver and the room from where the pistol has been recovered was in the use of my guards,” he added.

“I see some changes in my room, my passport wasn’t found at its usual place, he said, adding, “this hints that somebody came here during the period of my custody.”

Replying to the questions of the journalists, Shahbaz Gill confirmed PTI chief Imran Khan’s claims regarding being sexually assaulted in police custody.

“Yes, I was sexually abused,” he said in response to the question.

We are officially living in a Banana republic. @amnesty @UN @UNHumanRights pic.twitter.com/g4sASCyt9W

Keep in mind that Shahbaz Gill was arrested in Muzaffargarh on 17, July, Sunday.