Smoke could be seen billowing out over the city's skyline on the site of incident. 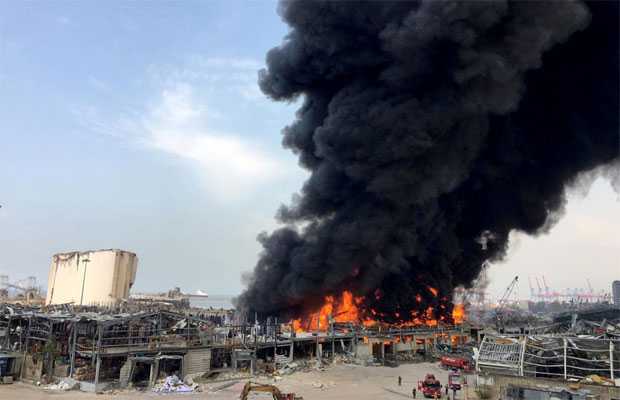 A massive fire broke out in the port of the Lebanese capital Beirut, one month after a dreadful explosion that killed more than 190 people.

According to the reports from international media, the inferno erupted in an oil and tyre warehouse in the port’s duty-free zone. Officials told local media it was contained to one place.

Smoke could be seen billowing out over the city’s skyline on the site of incident. Reports said that it was not immediately clear what caused the fire. No casualties have been reported so far.

Lebanese army said in a statement that it began at a warehouse where oil and tires are kept in the port’s duty-free market.

Meanwhile, the fire tenders are at the scene, while the military said its helicopters were also being used in efforts to extinguish the blaze.

Footage shared on social media showed port workers running away as the fire broke out. Beirut residents are also  sharing videos on social media expressed their dismay that yet another disaster was unfolding in their city, saying that the scenes were all too familiar.

The sky has turned black again in Beirut. pic.twitter.com/8Z8OSVu4QD

Fire in the port again in #Beirut. This is from my car. Its confirmed that a warehouse containing oil and tires is burning. pic.twitter.com/Xdy970lVmB

Efforts are being done to extinguish the fire, which appears to have spread to adjacent warehouses.