National flag has been hoisted at all major government buildings. 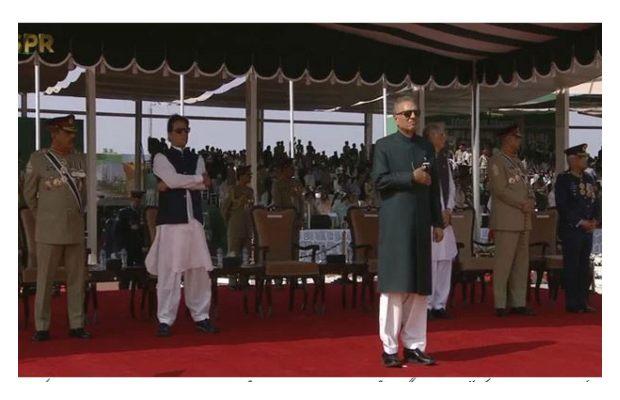 The nation is celebrating Pakistan Day with patriotic zeal and zest today on 23 March 2022.

Special prayers were offered in mosques after Fajar prayers for the progress and prosperity of Pakistan.

The day was marked with the joint armed forces parade held in full swing in Islamabad to exhibit the country’s military prowess and cultural diversities.

The troops from countries including Saudi Arabia, Turkey, Uzbekistan, Azerbaijan, and Bahrain also participated in the show.

Cabinet members, diplomats, senior civil and military officials, and prominent figures who gained accolades for their services to Pakistan were also present at the show held in the federal capital.

The dignitaries participating in the 48th Session of the Council of Foreign Ministers of the Organization of Islamic Cooperation also attended the Pakistan Day Parade as Guests of Honor.

Each year the day is observed to commemorate the passage of the historic Lahore Resolution on 23rd March 1940, under which Muslims of the sub-continent set the agenda of a separate homeland for themselves.

As the nation celebrates the 82nd Pakistan Day, President Dr. Arif Alvi and Prime Minister Imran Khan, have extended their separate messages on the occasion.

President Dr. Arif Alvi in his message to the nation said that the demand for a separate homeland for Muslims of the sub-continent has proved to be politically correct over time.

He said human rights violations in the Indian occupied Jammu and Kashmir and persecution of minorities in India are sufficient grounds to believe that the Muslim leadership of that time had clearly visualized what was in store for the Muslims if they remained at the mercy of the Hindu majority in undivided India.

Pakistan Day is a landmark day in the history of the sub-continent on many counts.

On this day in 1940, the Muslims changed their demand from "separate electorates" to a "separate state," made it clear to pic.twitter.com/NkF7c9bc72

Prime Minister Imran Khan in his message stressed the need to adhere to the principles of Unity, Faith, and Discipline given by Quid-e-Azam Muhammad Ali Jinnah, and to rededicate ourselves to the development of Pakistan as a truly democratic welfare State on the model of Riyasat-e-Madina.

He added that the incumbent government has brought in long-term reforms and initiatives to alleviate poverty and promote justice.

PM Imran Khan said that the government’s focus remains on the marginalized segments of the society to provide them equal opportunities.

tweet
Share on FacebookShare on TwitterShare on PinterestShare on Reddit
Saman SiddiquiMarch 23, 2022
the authorSaman Siddiqui
Saman Siddiqui, A freelance journalist with a Master’s Degree in Mass Communication and MS in Peace and Conflict Studies. Associated with the media industry since 2006. Experience in various capacities including Program Host, Researcher, News Producer, Documentary Making, Voice Over, Content Writing Copy Editing, and Blogging, and currently associated with OyeYeah since 2018, working as an Editor.
All posts bySaman Siddiqui