News Alert: 6 injured in a blast in Gulistan-e-Johar Area, Karachi 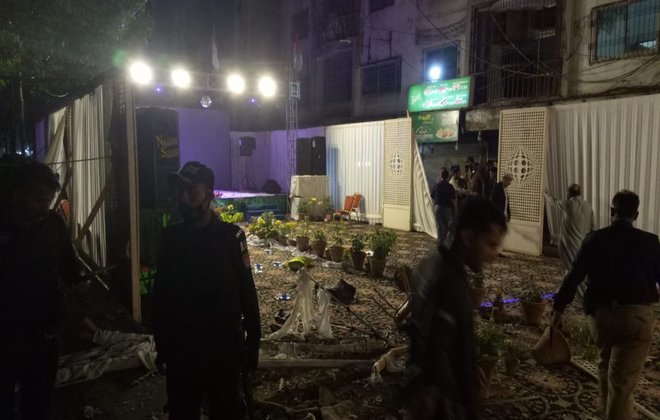 At least 6 people reported to be injured in a blast which occurred in Gulistan-e-Jauhar area, Karachi, Saturday night in late hours.

According to D.I.G Karachi(East) Aamir Farooqui, it was a cracker attack on Mehfil-e-Milad, cracker was thrown packed in a box, 6 people have been injured.

The latest news also claim that a bomb was fix in a plant-pot nearby the stage. Thankfully no casualty was reported. According to the Police the gathering was being held without taking prior permission from relevant authorities.

After the incident Police and Rangers officials rushed at the spot, bomb disposal squad was also called at the location.

The area near Perfume Chowk has been cordon down. And law enforcement agencies are conducting search operation in nearby area including building.

tweet
Share on FacebookShare on TwitterShare on PinterestShare on Reddit
Saman SiddiquiDecember 9, 2018
the authorSaman Siddiqui
Saman Siddiqui, A freelance journalist with a Master’s Degree in Mass Communication and MS in Peace and Conflict Studies. Associated with the media industry since 2006. Experience in various capacities including Program Host, Researcher, News Producer, Documentary Making, Voice Over, Content Writing Copy Editing, and Blogging, and currently associated with OyeYeah since 2018, working as an Editor.
All posts bySaman Siddiqui