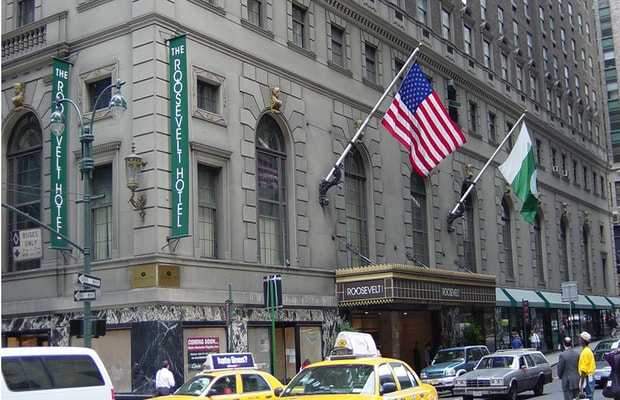 Roosevelt Hotel in NewYork is on privatization agenda to be discussed on the cabinet committee meeting on July 1, Murtaza - OyeYeah News
1Share
928Views

The PTI government is moving ahead to sell PIA owned Roosevelt Hotel, New York. As per details,Cabinet committee takes up privatisation of the historic asset.

As being reported, the summary for the privatisation of the Roosevelt Hotel has been prepared by the Aviation Division. Adviser on Finance and Revenue Dr. Hafeez Shaikh will chair the discussion, to be held in the prime minister’s office.

Senator Murtaza Wahab shared the official document revealing that the hotel owned by Pakistan International Airlines, Roosevelt Hotel in NewYork is on privatization agenda to be discussed on the cabinet committee meeting on July 1.

In a tweet, PPP lawmaker shared his reservations, objecting to the PM Imran Khan’s government policies.

“This is what Imran Khan wants to do actually? Sell PIA’s assets worth billions of dollars. I would be very interested in finding out who would be making the bid to acquire the Roosevelt Hotel, New York”, he tweeted.

The news bit has already left Pakistanis in an uproar:

The hotel was leased by Pakistan International Airlines back in 1979 through its investment arm PIA Investments Ltd. (“PIA”), with an option to purchase the building after 20 years. Prince Faisal bin Khalid bin Abdulaziz Al Saud of Saudi Arabia was one of the investors in the 1979 deal.

In 1999, PIA exercised their option and bought the hotel for $36.5 million, after a legal battle with owner Paul Milstein, who claimed it was worth much more.

In 2005, PIA bought out its Saudi partner in a deal that included the prince’s share in Hôtel Scribe in Paris in exchange for $40 million and PIA’s share of the Riyadh Minhal Hotel (a Holiday Inn located on property owned by the prince).

PIA has since controlled 99 percent interest in the hotel, while the Saudis have only 1 percent.

In July 2007, after a major $65 million (equivalent to $80,147,000 in 2019) renovation, PIA announced that it was putting the hotel up for sale. The increasing profitability of the hotel, at the same time as the airline itself, started to incur massive losses, resulted in the sale being abandoned.

tweet
Share on FacebookShare on TwitterShare on PinterestShare on Reddit
Saman SiddiquiJuly 1, 2020
the authorSaman Siddiqui
Saman Siddiqui, A freelance journalist with a Master’s Degree in Mass Communication and MS in Peace and Conflict Studies. Associated with the media industry since 2006. Experience in various capacities including Program Host, Researcher, News Producer, Documentary Making, Voice Over, Content Writing Copy Editing, and Blogging, and currently associated with OyeYeah since 2018, working as an Editor.
All posts bySaman Siddiqui