Party leader Maryam Nawaz had arrived at the NAB office to record her statement in a case related to illegal acquisition of land in Raiwind. 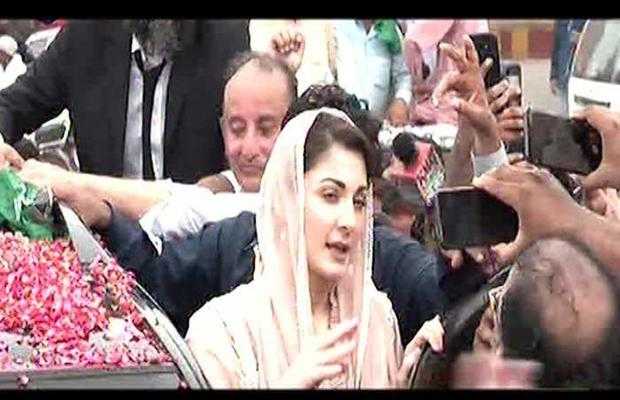 PML-N workers and police clashed on Tuesday outside a National Accountability Bureau (NAB) office in Lahore ahead of  Maryam Nawaz hearing on Tuesday.

Party leader Maryam Nawaz had arrived at the NAB office to record her statement in a case related to illegal acquisition of land in Raiwind.

The situation outside the NAB building turned violent when Maryam Nawaz arrived in a caravan including several cars and hundreds of supporters on foot outside the NAB premises on Multan Road and a clash occurred between police and PML-N workers.

Following the violent situation, the National Accountability Bureau postponed Maryam Nawaz’s hearing and decided to file cases against the demonstrators. Gates of the NAB office were closed.

The NAB said in its declaration that Maryam Nawaz was summoned in a personal capacity to record her statement but her party workers got involved in hooliganism at the time of appearance.

Maryam Nawaz has alleged that police fired tear gas, pelted stones; on the contrary, NAB says she “displayed hooliganism in an organised manner through workers”.

“Police attacking my car. Imagine if it were not a bulletproof vehicle. Shame”, tweeted Maryam Nawaz with a video of police pelting stones at her convoy.

Police attacking my car. Imagine if it were not a bullet proof vehicle. Shame. pic.twitter.com/VtQLJlXFhr

“I strongly condemn police shelling, use of tear gas and lathi charge on innocent party workers who came to show solidarity with me,” she said.

According to the PML-N spokesperson, at least 50 workers were arrested by police during the clash. The scenes of mayhem are circulating on social media.

Later, Maryam Nawaz came out of her car to address PML-N workers present outside the NAB office.

“I am standing here. If you have summoned me then listen to my answers,” said Maryam.

She added that she will not leave as she has come to respond to the “fake allegations” against her.