Minneapolis: CNN reporter and camera crew arrested as they reported live from protests

Reporter Omar Jimenez was live on air speaking about the situation when police in riot gear arrested him. 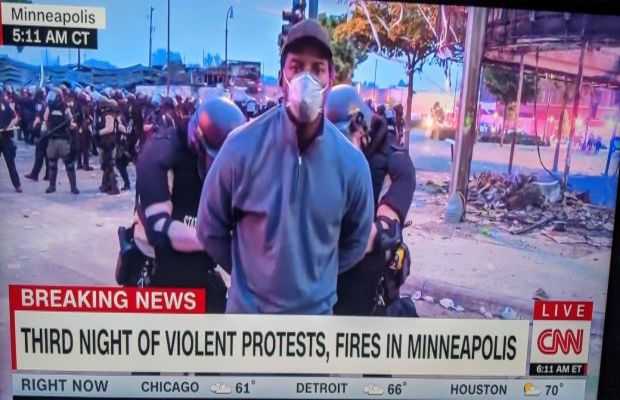 Minnesota police have arrested CNN reporter and camera crew as they reported live from protests in Minneapolis. The incident was watched by millions live on TV.

Reporter Omar Jimenez was live on air speaking about the situation when police in riot gear arrested him by placing handcuffs.

CNN has called the arrest of its team in the US state of Minneapolis “a clear violation of their First Amendment rights”, a black reporter from CNN was arrested while legally covering the protests in Minneapolis. Meanwhile, a  white reporter who was also on the ground was not.

“It didn’t make any sense to me,” said law enforcement analyst Charles Ramsey on the arrest of a CNN team in Minneapolis who had clearly identified themselves as press.

“There’s no way something like that should occur”, he added.

A state of emergency was called in the city of Minneapolis on Tuesday night after protests and riots erupted over the death of a black American George Floyd.

As being reported, Floyd died Monday at HCMC after an officer kneeled on his neck for several minutes, ignoring Floyd’s protests that he couldn’t breathe.