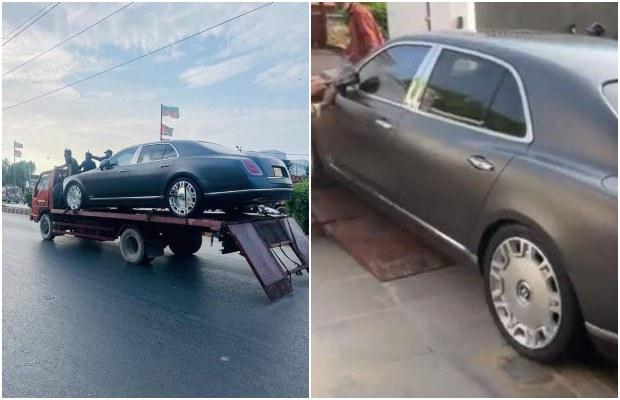 A stolen Bentley Mulsanne from London was recovered in Karachi on Saturday on the information given by the UK intelligence agency.

The car’s assessed value is 5.8 crore, and inclusive of duties is 30 crore.

A local businessman managed to get it registered from Sindh Excise without paying any duties.

However, the chassis number of the vehicle matched the given details of the stolen vehicle.

In an unprecedented incident, a stolen vehicle from London was recovered from Karachi after the British intelligence agency sent credible information to the Collectorate of Customs Enforcement (CCE), Karachi that a grey Bentley Mulsanne, V8 Automatic, VIN number SCBBA63Y7FC001375, engine number CKB304693, which was stolen from London, is parked in DHA area.

Custom raided a house in DHA Karachi to recover Bentley which was allegedly stolen from London. pic.twitter.com/xoXvQIgiNO

Customs Enforcement Anti-Smuggling Officers conducted a raid in the Defense Phase 2 area of ​​Karachi on a tip-off and recovered a valuable vehicle, the owner of the house has been identified as Jameel Shafi.

Naveed Balwani was also summoned by the customs officials, but Naveed Balwani could not give a satisfactory answer, and the number plate on the vehicle also turned out to be fake, and no record was found in the excise.

Customs officials have arrested Jameel Shafi and Naveed Balwani, while investigation has also been started against Naveed Yameen and two unknown persons, the recovered vehicle has been taken into custody and transferred to the customs warehouse.

According to Customs officials, the vehicle recovered from the Defense House was stolen from London and brought to Pakistan on forged documents from the embassy of a European country.

In another operation, customs officials raided a residential building in Clifton and seized a non-customs paid car worth crores of rupees.

The vehicle could not move from its place as it was locked, it was moved to the Customs office with the help of a tractor.

The authorities seized a Range Rover from an apartment complex in Karachi after concluding that the owner owed millions in import duties and taxes.

Customs authorities in Pakistan seize a Range Rover from a swanky apartment complex in Karachi after it concluded that the owner owed millions in import duties and taxes pic.twitter.com/0UDdo8ffCY

tweet
Share on FacebookShare on TwitterShare on PinterestShare on Reddit
Saman SiddiquiSeptember 3, 2022
the authorSaman Siddiqui
Saman Siddiqui, A freelance journalist with a Master’s Degree in Mass Communication and MS in Peace and Conflict Studies. Associated with the media industry since 2006. Experience in various capacities including Program Host, Researcher, News Producer, Documentary Making, Voice Over, Content Writing Copy Editing, and Blogging, and currently associated with OyeYeah since 2018, working as an Editor.
All posts bySaman Siddiqui