The US blogger took to Facebook Live on Friday claiming that the ex- interior minister raped her adding that two other senior PPP leaders  also physically manhandled her. 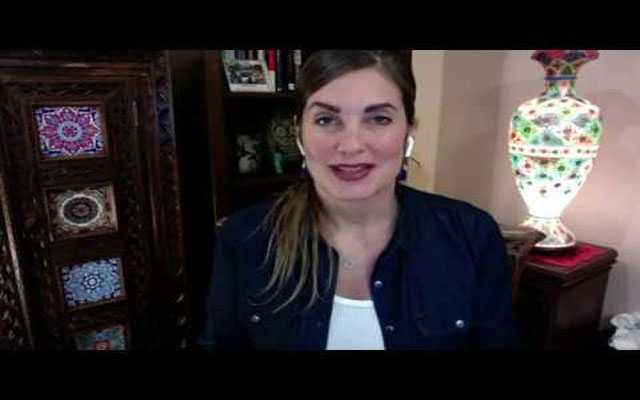 The US blogger took to Facebook Live on Friday claiming that the ex- interior minister raped her adding that two other senior PPP leaders  also physically manhandled her.

In a series of tweets by Ritchie, after going live with the claims that she had gone to the Interior Minister’s home in 2011, under the impression that she would meet him about her visa status. where, according to her, she was given “flowers/ a drugged drink”.

“I thought it was a meeting about my visa but I was given flowers [and] a drugged drink,” she claimed, adding that she had “kept quiet” about the incident because “who in the [ruling government] would help me against the [accused minister]?”

And, yes, I did tell someone at the UsEmb in 2011, but due to 'fluid' situation and 'complex' relations between US and Pakistan, response was less than adequate.

I've been engaged to a wonderful man who I met in 🇵🇰. He encouraged me to speak out, so we can move on as a couple. https://t.co/PpfdF9Fuib

The blogger went on to say that she informed about the incident in the US embassy that year, adding that “owing to fluid and complex Pak-US relations, the response was less than adequate”.

In the video, a serious allegation was also leveled against two other PPP leaders — a federal minister and former prime minister Yousuf Raza Gillani, stating they had “physically manhandled” her when the latter “was staying at the President House”.

PPP response on the allegations against ex-PM

Meanwhile, former PM Yousuf Raza Gillani’S son Ali Haider Gilani responded to the allegations on Twitter: “Can a prime minister ever commit such an act at the Aiwan-e-Sadr?”

Haider further tweeted to ask who gave her the right to blame politicians ‘like this’; saying that even replying to such accusations would be “contemptuous”.

He said that Ritchie “should be ashamed of herself for saying such things,” adding that, “I am not worried about what was said about me. I am more concerned about the baseless accusations leveled at Shaheed Benazir”.

The former premier also responded to the allegations while speaking to a private news channel saying that “although he had met Ritchie a while back at a diplomat’s residence, as well as at different occasions, but in large gatherings.

“I am not aware of her background. She contacted my son Ali Qadir Gillani a while back. She told my son his father is an honourable man and he should inquire after me on her behalf.”

Note that, last month Ritchie’s controversial comments on slain PPP leader Benazir Bhutto sparked outrage among the PPP leaders leading to a complaint being filed against her with the Federal Investigation Agency’s (FIA) cybercrime wing. 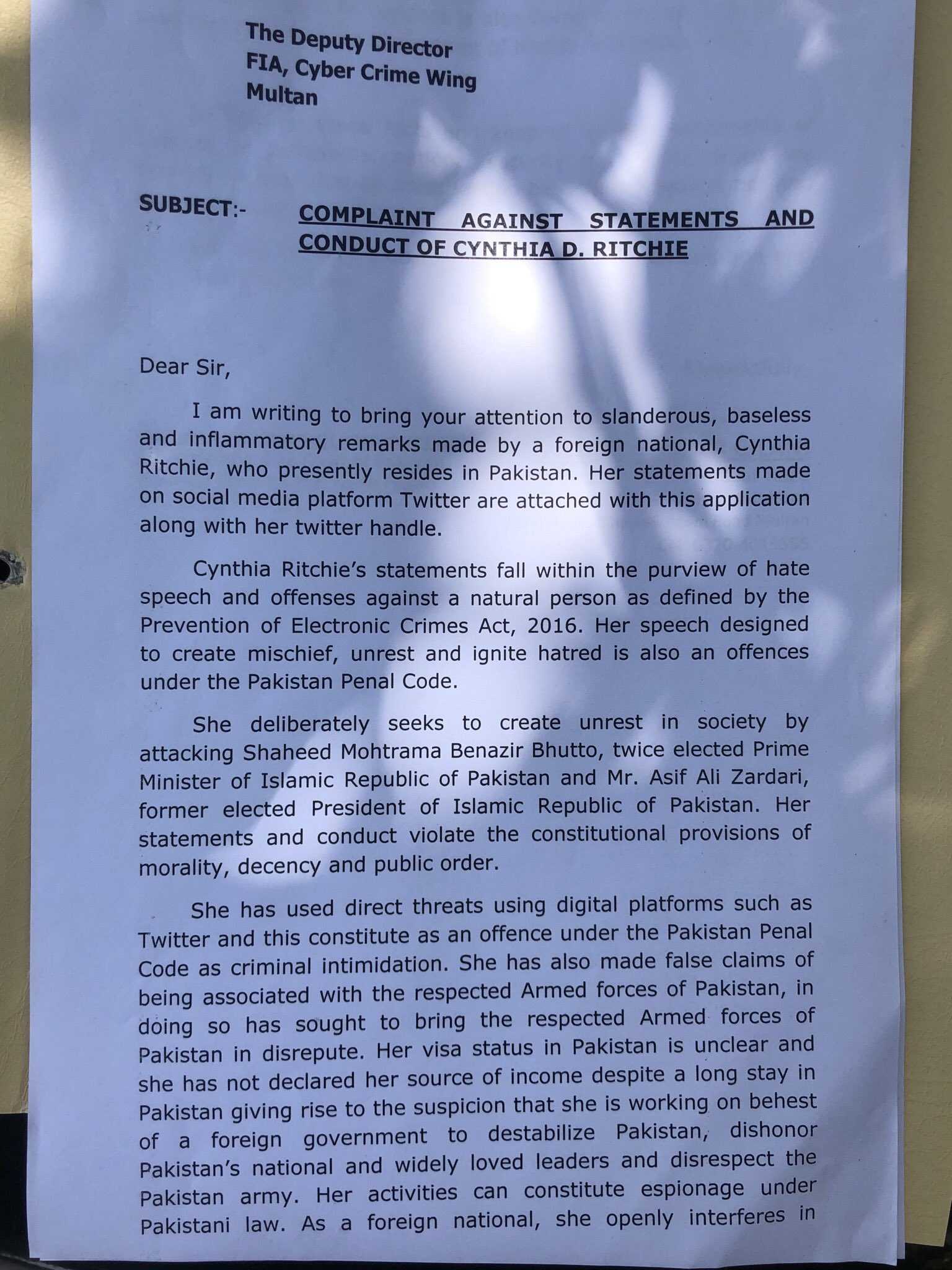 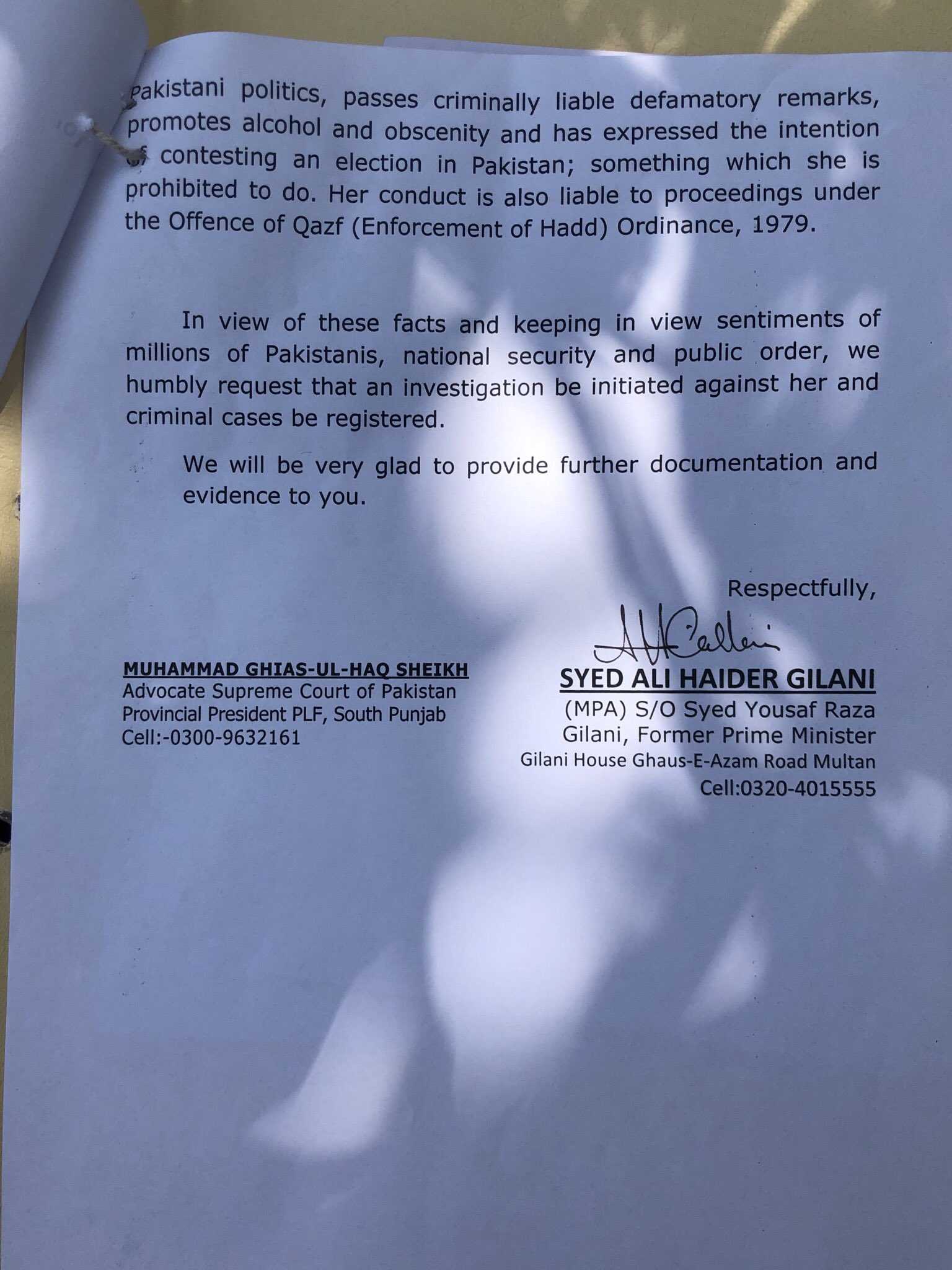 The US blogger has since posted photos of other PPP leaders while also making scandalous claims about the party’s senior leadership.

This echos stories of what BB used to do when her husband cheated. She"d have the guards rape the women.

Why do women condone this rape culture? Why aren't the men ever held accountable? Where is the justice system?

After constantly giving a clue that she had her reasons for the allegations, she tweeted about the rape incident on Friday and then went live on Facebook in which she narrated the incident that took place at Rehman  Malik’s official residence in the Minister’s Enclave in 2011.