Karachi is completely submerged, no one is doing anything: Wasim Akhtar said 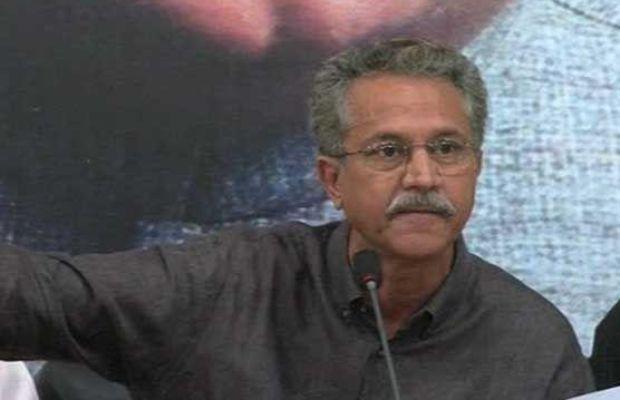 Wasim Akhtar lashes out at PPP Government in a press conference on Tuesday following the situation in Karachi amid recent rains.

MQM Pakistan leader and former mayor of Karachi Wasim Akhtar has said that the situation in Karachi is not hidden and the city has been destroyed, so Asif Zardari and Bilawal should see the incompetence of their team.

Addressing a press conference in Karachi, Wasim Akhtar said that the situation in Karachi after the rains was not hidden from anyone. Why were no arrangements made? Where was the PDMA?

The former mayor said that why is Karachi being toyed with, all the underpasses were closed due to rain yesterday, the people of the city are asking where the tax goes, Karachi’s tax should be levied in Karachi itself.

Wasim Akhtar said that people of relevant institutions were not present on the streets, all had gone inside Sindh to celebrate Eid, and there can be no more bad governance, Asif Zardari and Bilawal Bhutto see the incompetence of their team, “you did not transfer the authority to the lower level administration, that caused the failure, look at the situation in Larkana and Naudero.

He questions the Sindh government why it did not clean the drains a month ago. The city has been destroyed, the same thing happens every year but this time the destruction has happened, everyone saw what happened in Karachi after the rains, the city’s infrastructure was not there before, and what was left was ruined.

The MQM leader further said that the mandate of Karachi is with the MQM, it was agreed that they would accept each other’s mandate.

“It is your duty to implement Article 140A, and the mandate of MQM is stolen and different parties are made winner,” he said.

Wasim Akhtar said that for four years we have been trying to bring the powers to the lower level, at the moment the administrator has all the powers that I did not have.

tweet
Share on FacebookShare on TwitterShare on PinterestShare on Reddit
Saman SiddiquiJuly 12, 2022
the authorSaman Siddiqui
Saman Siddiqui, A freelance journalist with a Master’s Degree in Mass Communication and MS in Peace and Conflict Studies. Associated with the media industry since 2006. Experience in various capacities including Program Host, Researcher, News Producer, Documentary Making, Voice Over, Content Writing Copy Editing, and Blogging, and currently associated with OyeYeah since 2018, working as an Editor.
All posts bySaman Siddiqui