Kangaroos script a glorious new chapter in the history of this format of the game. 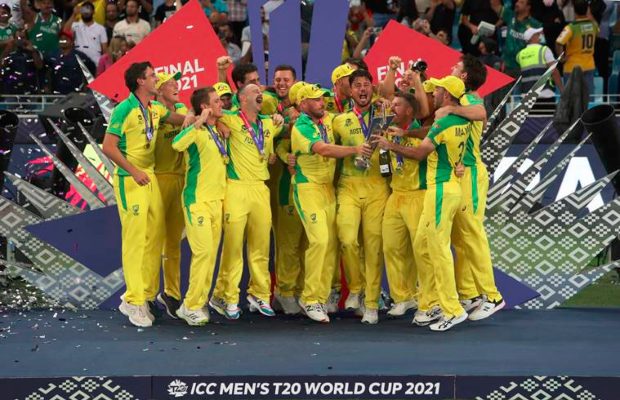 Australia lifted the ICC World T20 Cup trophy for the first time by defeating New Zealand with eight wickets in a nerve-wracking final on Sunday.

Australia after winning the toss opted to bat and restricted the Kiwis to post a total of 173/4 in an all-important final.

Kane played a special inning to set up the win, however, the partnership between Marsh and Warner sealed the game for the Aussies. The way Marsh began his innings from ball 1 took New Zealand completely by surprise.

For New Zealand, Trent Boult was the most effective bowler who took two wickets.

David Warner has been named is the 2021 T20  World Cup Player of the Tournament.
Warner scored  289 runs at an average of 48.16, including a crucial half-century in the final.
tweet
Share on FacebookShare on TwitterShare on PinterestShare on Reddit
Saman SiddiquiNovember 14, 2021
the authorSaman Siddiqui
Saman Siddiqui, A freelance journalist with a Master’s Degree in Mass Communication and MS in Peace and Conflict Studies. Associated with the media industry since 2006. Experience in various capacities including Program Host, Researcher, News Producer, Documentary Making, Voice Over, Content Writing Copy Editing, and Blogging, and currently associated with OyeYeah since 2018, working as an Editor.
All posts bySaman Siddiqui