ICC World Cup 2019: Here is what cricket biggies say ahead of India-Pak clash 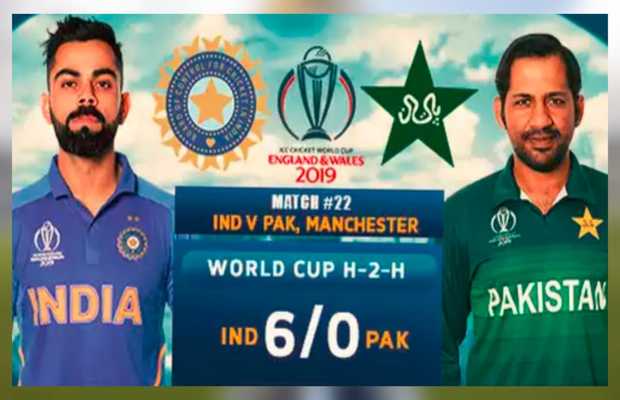 Sunday, 16th of June is the biggest day for ICC World Cup 2019, as two arch rivals Pakistan and India face each other in Manchester depending upon the weather conditions.

Ahead of the Pakistan vs India clash,  excitement is skyrocketing, and here what cricket biggies say ahead of India-Pak clash:

Former skipper, Sultan of Swing Wasim Akram believes that the odds are in favor of Virat Kohli’s team due to depth in their batting complimented with aggressive fast bowling.

Wasim Akram said, “Its 70-30 in India’s favour,” when he was asked about his forecast of the match.

“Kumar and Bumrah are in good form. So, overall India looks a very good side”, he added further ahead of the ICC World Cup 2019 game in Manchester.

Former fast pacer, Waqar Younis, who also coached Pakistan, says: “It’s simple — if Pakistan wants to stay in the tournament, they have to bring an ‘A-plus’ performance and win that game.”

“They might go for five bowlers, use four pacers and Shadab and drop someone like Shoaib Malik,” he said in a column for the ICC. “When Pakistan play India it’s always a huge game, but their meeting on Sunday is shaping up to be more crucial than ever,” Younis, further added.

Former Pakistani Cricketer Inzamam-ul-Haq, on Pakistan vs India match says that India has a balanced team and has performed well so far in ICC world cup. “It is a big match but at the end of the day it is a game. I appeal to people to see it as a game”, he said while talking to the news agency.

Veteran Indian cricketer Sunil Gavaskar in a column for the International Cricket Council, wrote:
“It´s a must-win game for them (Pakistan). If they don´t win, it´ll be very tough”.

The fact it´s an old rivalry means it will be followed closely by the people of both countries, but Pakistan has had a bit of a stumble so far so there´s probably a bit more pressure on them”, he further added.

Indian skipper Virat Kohli ahead of Ind-Pak match says, “If we play well, we can beat anyone. Nothing changes according to the opposition. For the players, it is very important to be professional, be it any team you are up against”.

In an interview with Pakistani news channel, former spinner said, “I feel that Pakistan will depend much on Amir and other fast bowlers. If they can manage to take early wickets against India, then it will be easy for them to restrict India by 250. Anything above 300 can be difficult for Pakistan. Babar Azam is a good player, I love to see him playing as he has proper technique. Your openers are very good too”.

“I just hope that weather allows a full 50 over game because everyone wants to see this match, India vs Pakistan game is the true flavor of World Cup. If it gets washed out everyone will be disappointed,” Harbhajan said.

“Sarfaraz is a good player, but he needs to lead the team like Imran Khan did in this big match,” the former Indian spinner advises Pakistani skipper.

tweet
Share on FacebookShare on TwitterShare on PinterestShare on Reddit
Saman SiddiquiJune 16, 2019
the authorSaman Siddiqui
Saman Siddiqui, A freelance journalist with a Master’s Degree in Mass Communication and MS in Peace and Conflict Studies. Associated with the media industry since 2006. Experience in various capacities including Program Host, Researcher, News Producer, Documentary Making, Voice Over, Content Writing Copy Editing, and Blogging, and currently associated with OyeYeah since 2018, working as an Editor.
All posts bySaman Siddiqui