Azmaish Episode 39-45 Overview: Shiza is exposed and Basit divorces her 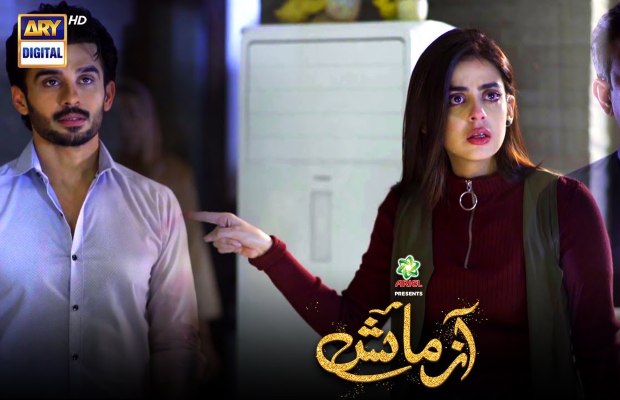 Azmaish the drama serial airing at ARY Digital is down with a whole week of new episodes, so much happened so here is a quick overview of all these episodes. We have seen that Shiza is having a deal with Nimra’s father and as a result, Nimra runs away to live with her real father. In these episodes, Shiza is exposed and one of the major development is that Basit divorces Shiza.

Nimra is too naive to be true, despite hearing so much bad about his father she takes this leap of faith and decides to live with her biological father, she runs away in the middle of the night. Nimra’s greedy father has no interest in her all he needs is money. Tufail is really upset about Nimra’s absence he wants her back at any cost. Shiza has written a letter,  a faking Nimra’s handwriting, saying that she has eloped with her lover.

Basit finds out Nimra and later when he inquires from her about her letter she knows nothing about it. Basit gets furious that Shiza can go at any length to demean Nimra in Tufail’s eyes. He confronts Shiza badly, he slaps hard on her face and exposes Shiza in front of Tufail. Shiza herself confesses that she has made a deal with Nimra’s father. Basit divorces Shiza on the spot and leaves the house, everyone is left behind shocked.

Shiza is extremely shocked, she is not expecting that Basit will leave her like that. Now for her, it is a matter of her ego, she is resolute that she will take revenge from Basit. Nimra’s greedy father’s loafer friend who is also an elderly man wants to marry Nimra and Nimra’s greedy father makes a deal with him but Nimra’s cousin Faisal acts like her guardian angel and saves her timely from that matchless wedding.

She takes Nimra to his home where poor Nimra hears everything and she sees her father’s true ugly self. Faisal takes her to Basit’s place. Basit who is planning to leave the city decides to stay and help Nimra out. Nimra currently is living with him and Basit is helping to find a flat on rent for her. There is so much absurdity we know that Basit has no feelings for Shiza then why there is a picture of hers in his wallet? Shiza shamelessly knocks at Basit’s door, she wants to catch both Basit and Nimra together. Will Basit be able to save Nimra in the future from her greedy father as he has also seen Basit’s house?

tweet
Share on FacebookShare on TwitterShare on PinterestShare on Reddit
Rameeza NasimSeptember 2, 2021
the authorRameeza Nasim
Rameeza Nasim, a Paralian, passionate about poetry, drama and fiction. By giving drama critiques I feel like I am endorsing the writer's message to the audiences, I love my job. Being a critic responsibility lies on my shoulders to point out the flaws and shortcomings of the play be it on writer's , performers or director's end . I did my Masters in English Literature and Linguistics .
All posts byRameeza Nasim