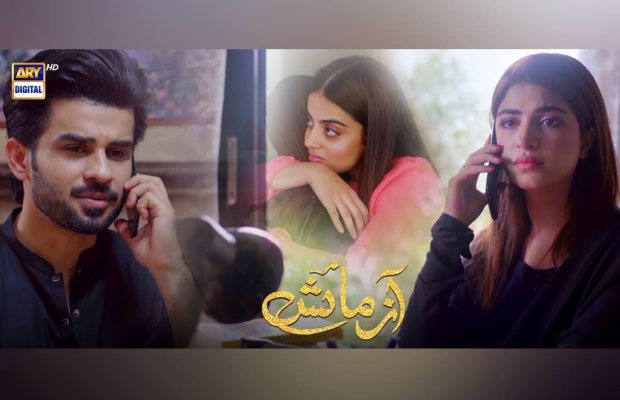 ARY Digital’s daily soap Azmaish despite crossing 52 Episodes has not yet turned in a dragged serial although at points it looks tedious. Fahad Shaikh’s appearance is what makes us want to watch the play. In previous episodes, we have seen that how Nimra has left with no choice but to live with Basit, and in these episodes, it turns out that Basit is desperate to marry Nimra!

Nimra has gone through a lot, her accident scene has made her even more precious in Basit’s eyes. Basit recalls the moment when he lays his eyes first time on Nimra in College and how he is not able to stop looking at her. He fell in love with her at first sight and now all he wants is to get his first love. He even shares it with Faisal and Rohaan.

Rohaan like any sensible person is quick to help out Basit. He supports his idea of marrying Nimra. He says that he thinks Nimra is like his sister and as a true brother now it is his responsibility to marry her off to a suitable guy and according to him Basit seems a perfect match for Nimra. He and his mother even talk about it to Tufail. Tufail does not respond but he has not shown his disapproval initially.

Nimra’s reaction is quite reasonable and natural when Basit confesses to her that he really loves her and wants to marry her. Nimra clearly shows that how disgusted she is with the idea of marrying Basit as she always thinks of him as her brother-in-law. Her reaction is sensible but she is such a nincompoop that she leaves Rohaan’s place and starts living in Tufail’s house despite knowing that Shiza is ready to make her life hell again. Nimra’s foolishness is looking quite annoying to the audience. She should not be that dumb.

Shiza on the other hand is busy plotting against Nimra, she is still in contact with Nimra’s greedy father and there is some deadly scheming going on both ends. Faisal has an inkling of it he tries to warn Nimra but she seems too dumb to pick anything from it. Basit visits Tufail’s place to ask him Nimra’s hand on which Tufail starts blaming Basit for being a characterless person and that whatever Shiza is saying is right, well, one wonders that why he is not doubting Nimra and blaming her as well? Tufail is resolute that he will never let Basit marry Nimra. Nimra is really a fool to leave Rohaan’s place and she will be even more if she will start trusting Shiza. Will Basit be able to get his first love?

tweet
Share on FacebookShare on TwitterShare on PinterestShare on Reddit
Rameeza NasimSeptember 9, 2021
the authorRameeza Nasim
Rameeza Nasim, a Paralian, passionate about poetry, drama and fiction. By giving drama critiques I feel like I am endorsing the writer's message to the audiences, I love my job. Being a critic responsibility lies on my shoulders to point out the flaws and shortcomings of the play be it on writer's , performers or director's end . I did my Masters in English Literature and Linguistics .
All posts byRameeza Nasim