Shiza is still busy in her plotting 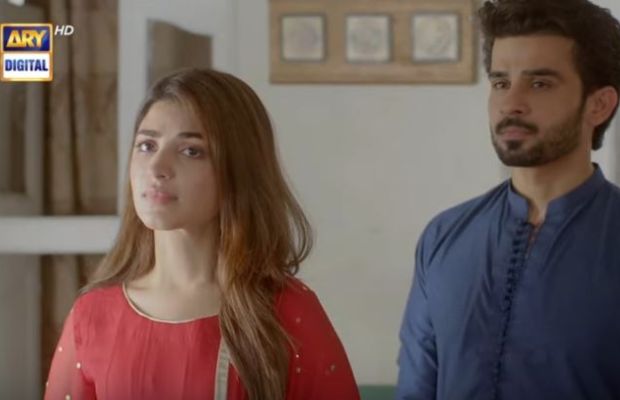 Azmaish the drama serial that airs daily at ARY digital has however turned quite tedious and repetitive, some of the characters are not making any sense for instance character of Tufail some time he acts like an egoist person someone time he acts like a very sane and reasonable person. In last week’s episodes, we have seen that Basit is desperate to marry Nimra and in these episodes, Basit marries Nimra.

Basit is quite desperate to marry Nimra and for that he visits Tufail’s house but there Tufail is also resolute that he will not marry off Nimra to Basit at any cost as it will going to affect his daughter badly. However things get changed, Basit gets injured and we have seen that it is Tufail Sahab who arranges Basit’s nikkah and convinces Nimra for it.

Nimra eventually agrees to marry Basit. Her Nikkah ceremony is arranged at Rohaan’s place. Samreen helps her with all the arrangements. We have seen that Nimra is reluctant when Molvi Sahab is asking her consent but eventually she said, Qabool Hai. However, at her wedding night, she tells Basit that she has not accepted him as her husband by heart.

Shiza on the other hand is giving an impression to her family that she has a change of heart and she has accepted everything and now she is moving on. However she has not! she is busy in some plotting against Nimra and Basit as rightly Samreen guessed that ” Ye b Dee ki koi Chaal hogi” Rohaan, Samreen,Phupho and Tufail everyone assuming that she is having a change of heart but in real Shiza is the same plotting against Nimra. Shiza tries to use Faisal by telling him that Nimra is not happy her father has forcefully married her to Basit.

Faisal is so naive and in love with Nimra that he straight away goes at Basit’s place to rescue his cousin. Nimra surprisingly admits in front of him that she has whole heartily accepted this nikkah no one has forced her and she is happy with her husband. The best thing Faisal does is that he names Shiza telling them that Shiza has told him that Nimra is not happy with this Nikkah. Nimra abjures this by saying that she is happy and forbids him not to come at her place again otherwise she will call the police. Nimra is not leaving Basit this is for sure. Will she going to accept him?

tweet
Share on FacebookShare on TwitterShare on PinterestShare on Reddit
Rameeza NasimSeptember 16, 2021
the authorRameeza Nasim
Rameeza Nasim, a Paralian, passionate about poetry, drama and fiction. By giving drama critiques I feel like I am endorsing the writer's message to the audiences, I love my job. Being a critic responsibility lies on my shoulders to point out the flaws and shortcomings of the play be it on writer's , performers or director's end . I did my Masters in English Literature and Linguistics .
All posts byRameeza Nasim