Maya is head to heal in love with Momin 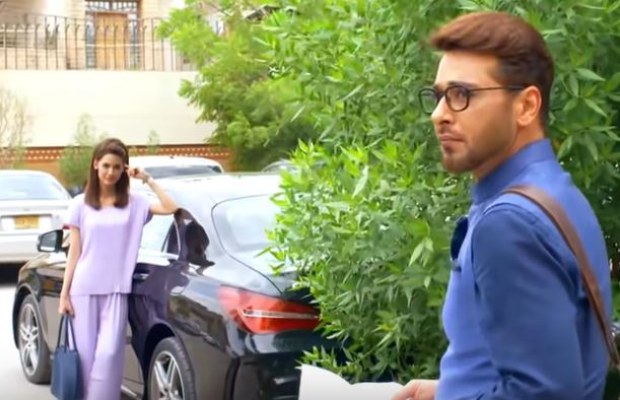 Dil-e-Momin the 7th Sky Entertainment’s production has aired its second episode, the play will air twice a week on Friday and Saturday at the Weekend Primetime slot on Geo Entertainment. With its second episode, the story is successful in grabbing our attention. In the previous episode, we have seen that the super gorgeous and rich Maya is in love with her lecturer Momin. In this episode, we find out that Maya is doing lots of efforts to grab her teacher’s attention and eventually she professes her love to him.

The episode begins with Maya dreaming about Momin her teacher. This will be going to be an interesting story as it is about a forbidden love between student and teacher and also it will be intense because it will be a love triangle between Momin, Aashi, and Maya and from Maya’s point of view it will be a trio of Maya, Momin, and Gohar.

Momin before going to work goes to Aashi’s house to meet her father but Aashi’s father very rudely behaves with him. Aashi and Momin’s chemistry is quite spectacular, Aashi is praising Momin calling him handsome but at the same time, she is being possessive about him fearing that some student might fall in love with him. Little she knows that a student is already head to toe in love with him.

Maya starts eyeing Momin, she invites Momin to a party saying that it’s a tradition that their class always throws a party for their teacher. Momin reluctantly agrees when she insists but later he finds that there is no such kind of tradition and also moreover the jealous Gohar spits his venom on Momin telling him that if he will attend this party he is going to lose his honor and dignity. Momin leaves the university without attending the party. Maya is super upset about her party getting ruined.

Maya when inquires about the professor’s absence at the party he snubs her for lying saying that the party was her personal affair on which she does not shy out in accepting. The more Maya gets snubbed by Sir Momin more she gets attracted towards him. She has made up her mind to grab his attention no matter what happens. Maya makes a sketch of Momin during his class and then she puts it on his bike. Momin picks that up and sees Maya standing there smiling, she says that she has done it as an apology token. She further professes her love for him and ran away not hearing that Momin is shunning all her feelings and advances.

tweet
Share on FacebookShare on TwitterShare on PinterestShare on Reddit
Rameeza NasimNovember 16, 2021
the authorRameeza Nasim
Rameeza Nasim, a Paralian, passionate about poetry, drama and fiction. By giving drama critiques I feel like I am endorsing the writer's message to the audiences, I love my job. Being a critic responsibility lies on my shoulders to point out the flaws and shortcomings of the play be it on writer's , performers or director's end . I did my Masters in English Literature and Linguistics .
All posts byRameeza Nasim