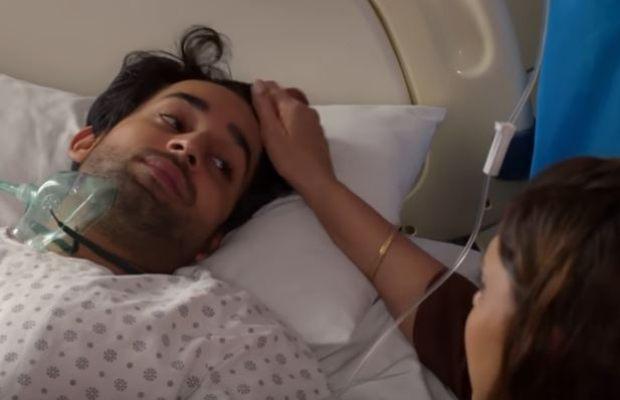 HUM TV drama serial Dobara is one of our favorite Prime Time Watch. With its progressive storyline and such detailed crafting of characters, the play is undoubtedly one of the finest in the running and for that writer, Sarwat Nazir, and director Danish Nawaz deserve all appreciation. In the previous episode, we have seen that Affan shoots Mahir in a brawl. In this episode, Mahir manages to win Mehru’s trust by saving Affan as he tells the Police that he got injured in a snatching incident outside his house.

Mehru is so much devastated with Mahir’s critical condition that she is crying all the time but her dressing hair does not seem like that. She calls her best friend Nayyara who schools Zameer which seems odd as no one talks like that with a son in law. Zameer on the other hand is all set to play his game and make this situation in his interest. He has told Police that Affan has shot Mahir. He is praying hard that Mahir die then Affan will get arrested and he will get hold of everything but his plans failed as Mahir gains consciousness.

The scene where Mehru goes to Mahir’s room and starts caressing his hair is such a touchy scene. Mehru confesses to Mahir that she can’t live if God forbid anything bad happens to him. Mahir tells Mehru that he is there for her always. One feel sad for Mahir’s father he is a good man and he deserves Mahir’s care too.

Here we get to see Mahir’s shades of character. He is basically a good guy the way he calls the house help his sister speaks volume about his character. His grey character and that hidden dark side is what makes him a real character. Mahir plays a masterstroke by recording his statement that he gets injured in snatching case, saving Affan in front of Mehru. This statement has not just won Mehru’s heart but her trust on Mahir too. We all tend to believe that Mahir is a good guy and he really cares for Mehru.

We get alarmed when Mahir purposely sends Mehru back home. His intentions are not pure we get to know this when he tells his friend that he only loves Narmeen not Mehru. He further shows his evil side by telling him that he has convinced Mehru for his trustworthiness. Well it makes us wondering that is Mahir always having that intentions from the starting of this marriage or it was just those words by Mehru that Mahir over hears about him which brings his dark side out? Whatever maybe the reason but Mehru does not deserve this our heart goes out for her.

tweet
Share on FacebookShare on TwitterShare on PinterestShare on Reddit
Rameeza NasimFebruary 24, 2022
the authorRameeza Nasim
Rameeza Nasim, a Paralian, passionate about poetry, drama and fiction. By giving drama critiques I feel like I am endorsing the writer's message to the audiences, I love my job. Being a critic responsibility lies on my shoulders to point out the flaws and shortcomings of the play be it on writer's , performers or director's end . I did my Masters in English Literature and Linguistics .
All posts byRameeza Nasim