Dobara Episode-26 Review: Life is back on track for Mehru and Mahir

Affan is thinking of moving to US to avoid Mahir 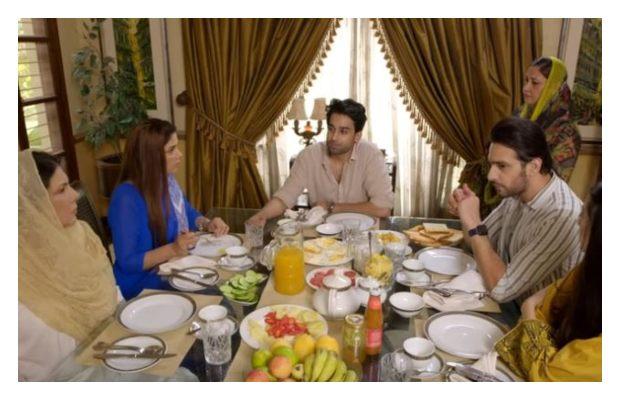 Dobara the drama serial airing on HUM TV is one of our favorite Prime Time Watch. The play is going super strong having performances that are top-notch. In the previous episode, Mahir came back at home winning hearts. In this episode, Life is back on track for Mehru and Mahir and Mehru asks Mahir to join the office. While Affan is still reluctant to face Mahir and to avoid him he is thinking of moving to the US with Sahar.

The opening scene is a very satisfying one, it’s good to see Phupho in a very awkward position and by the way, Mahir’s comic timings are so on point. Affan is still feeling awkward at the dining table, he is reluctant to face Mahir despite Mahir’s efforts of initiating a conversation and his welcoming gestures, Affan is too embarrassed to face him.

Affan makes quite a wise decision and it seems that he takes that decision after overhearing his mother’s conversation with Mahir where she is asking him to join back the office and Mahir is being reluctant telling her that Affan will handle the office affairs. It is for the very first time Affan realizes that he has no skill set to run such a huge business. He thinks the best idea is to move to the US and give his mother and Mahir some space.

Phupho regardless of how malicious she had been still has the audacity to face the family. The legendary Sakeena Sammu jee has given her best in this character, her expressions are so spot on. That lecherous Shabir is fired by Mahir and he deserved it. Phupho leaves the house and it seems this time it is like leaving forever as Mahir has clearly told her that this is Mrs Mahir’s house and Mahir has no sister. Mahir’s own mother scene where they intended to show us Canadian environment is a hard try, it could have been shot in a better way.

Zameer is after the money and he shamelessly demands it from Mahir after getting a befitting refusal from Mahir he threatens him in his own way claiming his position as the son in law. Minaal is such a nincompoop that she goes on her husband’s demand to ask for a hefty amount of 20Crores from her mother! The way she insults Mahir’s step mother and sisters is so out of character for her as she is shown to be someone having a very soft image. Well that insult is the most deserved dose for Mahir’s step mother who shamelessly gone there for out of her greed. Will Mahir and Mehru going to resist Zameer’s pressure or will they give up and try to save Minaal’s house?

tweet
Share on FacebookShare on TwitterShare on PinterestShare on Reddit
Rameeza NasimApril 21, 2022
the authorRameeza Nasim
Rameeza Nasim, a Paralian, passionate about poetry, drama and fiction. By giving drama critiques I feel like I am endorsing the writer's message to the audiences, I love my job. Being a critic responsibility lies on my shoulders to point out the flaws and shortcomings of the play be it on writer's , performers or director's end . I did my Masters in English Literature and Linguistics .
All posts byRameeza Nasim