Zoya elopes with Amir ending up being nikkahfied 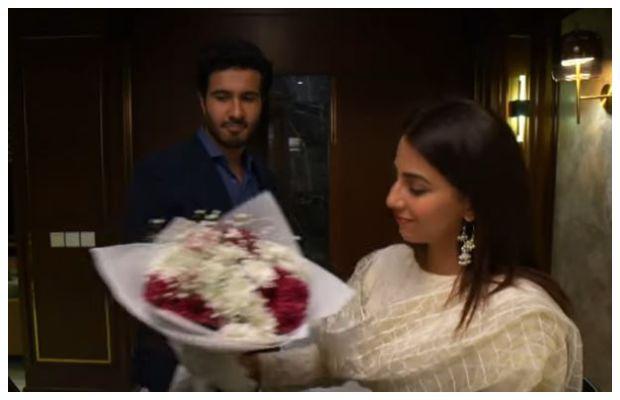 Ary Digital drama serial Habs is the best in the running with its nuances and sensible storytelling. Performances are super brilliant, particularly Feroze Khan and Ushna Shah’s chemistry is crackling. In the previous episode, we have seen Basit finding the courage to pay a visit to his mother’s grave. In this episode, Basit starts doubting Ayesha.

Zoya is successful in eloping with Aamir despite Bano having seen her going, she fails to stop her. Zoya elopes along with all the valuable gold jewellery and dresses she gets in Bari. Well stealing all those stuff makes her not a nice girl. Zoya and Aamir perform Nikkah in the presence of his friends, and the execution of the nikkah scene looks a bit sloppy. Zoya finally got what she wanted Aamir is now on her side standing for her rights.

Ayesha’s mother has created a lot of hues and cries over Zoya’s missing. She immediately calls Ayesha to her place. Everyone is shocked at Zoya’s conduct. Ayesha’s mother has forbidden the girls not to report to the police as it will going to bring disgrace to their family honor. Well, Ayesha on the other hand is worrying that what Basit will think about her family when he comes to know about Zoya’s elopement.

Well, Ayesha’s reservations are quite valid but her totally keeping Basit in darkness and lying with him is not cool at all. On top of that Ayesha makes a blunder when she calls Fahad and tells her about their problem and asks for his help in finding Zoya. She further requested Fahad not to share anything with Basit. Basit sees Ayesha and Fahad talking together and he also finds Ayesha lying to him about her presence in the house. Well, Basit has got all the good reasons to doubt Ayesha when he already has a history of mistrusting women.

Ayesha is providing Basit with enough material on the basis of which he can start doubting Ayesha. He is also behaving oddly with his good friend Fahad. Okay, Basit’s mistrust of women makes sense but why he is also being suspicious of his best friend’s intentions? Ah, we are so looking forward to seeing Fahad and Bano’s romance brewing but now it seems that the story has taken another ugly turn. We certainly do not want Basit to stoop so low. We have hardly seen any proximity between Basit and Ayesha and now it seems that they both are going to part ways. Still rooting for Basit and Ayesha and also hopelessly rooting for Fahad and Bano.

tweet
Share on FacebookShare on TwitterShare on PinterestShare on Reddit
Rameeza NasimSeptember 13, 2022
the authorRameeza Nasim
Rameeza Nasim, a Paralian, passionate about poetry, drama and fiction. By giving drama critiques I feel like I am endorsing the writer's message to the audiences, I love my job. Being a critic responsibility lies on my shoulders to point out the flaws and shortcomings of the play be it on writer's , performers or director's end . I did my Masters in English Literature and Linguistics .
All posts byRameeza Nasim