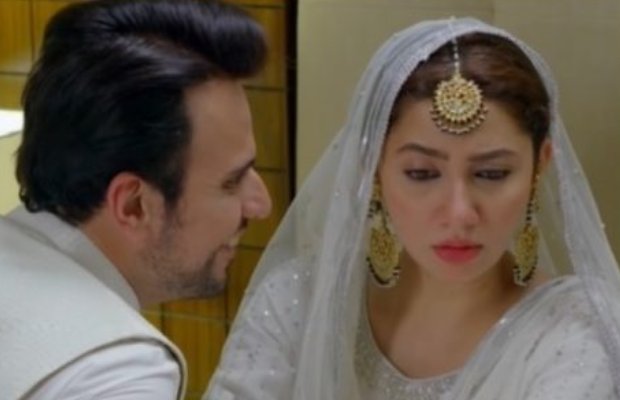 Hum Kahan Kay Sachay Thay the drama serial running at Hum TV has turned more depressing and toxic. The Story moves forward with Safwaan turning his back to Mehreen and Aswaad marrying her so that he can take his revenge for Mashal. In the previous episode it is shown that Aswaad spoils the proposal scene of Mehreen by claiming her as his fiance and in the latest episode, he marries her in revenge.

The episode begins when Aswaad’s mother is asking him about his conduct, he poses as if he really wants to marry Mehreen and he really loves her, he carries his fake claim of love so perfectly that his mother thinks that he is truly in love with her. She is trying to convince Mehreen for Aswaad but Mehreen knows all his reality, she knows that now he is resolute to punish her for the sins she has not even committed.

Then we have shown a scene of Safwaan with his mother in the car where his mother is expressing her reservations against Mehreen’s proposal. She says that she has initially agreed to this proposal for his happiness despite of ignoring all the defaming of Mehreen in the murder case but now since his fiance has jumped back she do not think that Mehreen is an appropriate choice for her. Aswaad on the other hand calls Safwaan and tell him to stay away from Mehreen as now he wants to marry her. The way Aswaad is laughing and teasing Mehreen that he truly loves her looks so creepy.

Safwaan has turned into a huge disappointment, he is not less than Aswaad in meanness and dumbness. He starts avoiding Mehreen and stops taking her calls. Mehreen moves to her friend’s house and call Safwaan through her friend. Safwaan tells her that he does not want to talk to her as she is now unacceptable to him. Moreover, he blames her for lying with him all the time. He is so mean to say that whatever Mashal has emailed him about her is true. He is so cruel that he even brings her father’s past in front of her. Her father’s past is not at all Mehreen’s fault even if she is lying she is justified in it.

Mehreen is extremely broken she has no choice but to marry Aswaad. Aswaad and Mehreen’s nikkah happens in a very limited private gathering and right after the nikkah Aswaad is showing his true colors to Mehreen. He starts torturing her like a creep. He is trying to make her pay a hefty price for the sin she has not even committed. Aswaad packs his bag and flies back to America leaving behind Mehreen. What will Mehreen do?

tweet
Share on FacebookShare on TwitterShare on PinterestShare on Reddit
Rameeza NasimNovember 1, 2021
the authorRameeza Nasim
Rameeza Nasim, a Paralian, passionate about poetry, drama and fiction. By giving drama critiques I feel like I am endorsing the writer's message to the audiences, I love my job. Being a critic responsibility lies on my shoulders to point out the flaws and shortcomings of the play be it on writer's , performers or director's end . I did my Masters in English Literature and Linguistics .
All posts byRameeza Nasim