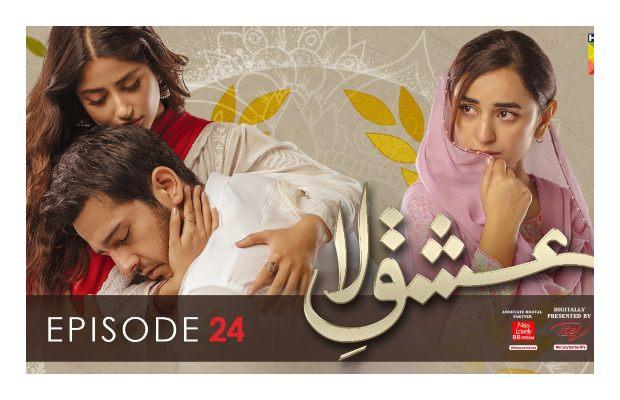 Ishq e Laa the drama serial airing at Hum TV is now 24 episodes down, the story seems bit dragged but it has nice subtle messaging in it. Performances are quite good. In the previous episode we have seen that Azka breaks up with Zain. In this episode it is shown that Azka’s path has once again crossed with Azlaan while her mother marries off her widow daughter in law.

We have seen Azlaan wandering into wilderness in the quest of peace. There is a scene where a cute kid asks him what he is doing there and why he is staring at him? Azlaan replies that he is in search of peace the little kid is not familiar with the word “Sakoon” he then hears his mother saying that “Quraan parhnay se Sakoon milta hay”. The next day the child finds Azlaan sitting there he tells him that his mother told him that Sakoon is in Quraan. Azlaan gets averse to that place as he does not want to hear God’s name.

Zain has done the most weird thing he tells his wife to be that he already loves someone and it is nearly impossible to forget that girl but he assures her that he will be always faithful to her and he will keep her happy. Well instead of appreciating his honesty the girl makes a lot of hue and cry and she ends up breaking her engagement. Zain’s sister’s husband Affan tells his wife to break her relationship with her brother is not making any sense when he is convincing his sister to appreciate and value Zain’s honesty.

Azka’s mother’s intentions to marry off her widow daughter in law is commendable but what seems problematic is that she is nearly forcing her decision on her. Kanwal has a grown up daughter and it will be quite difficult for her to accept her step father and what is the guarantee that he will be nice to her? Our heart goes out for poor Aliha when her mother is having nikkah.

Azka’s path crossed once again with Azlaan but this time at the hospital. Azlaan’s mother meets Azka and she recognizes her in an instant. She is extremely happy to see her as a competent doctor but Azlaan is not happy he is being arrogant and proud as ever. Azlaan’s mother needs a kidney transplant and Azlaan wants to give her his kidney. Well it seems that Azlaan’s kidney is not going to match with his mother’s. Will Azka offer her help and she is going to give her kidney?

tweet
Share on FacebookShare on TwitterShare on PinterestShare on Reddit
Rameeza NasimApril 8, 2022
the authorRameeza Nasim
Rameeza Nasim, a Paralian, passionate about poetry, drama and fiction. By giving drama critiques I feel like I am endorsing the writer's message to the audiences, I love my job. Being a critic responsibility lies on my shoulders to point out the flaws and shortcomings of the play be it on writer's , performers or director's end . I did my Masters in English Literature and Linguistics .
All posts byRameeza Nasim