Mahi’s family talks to her about her marriage to Sikandar. 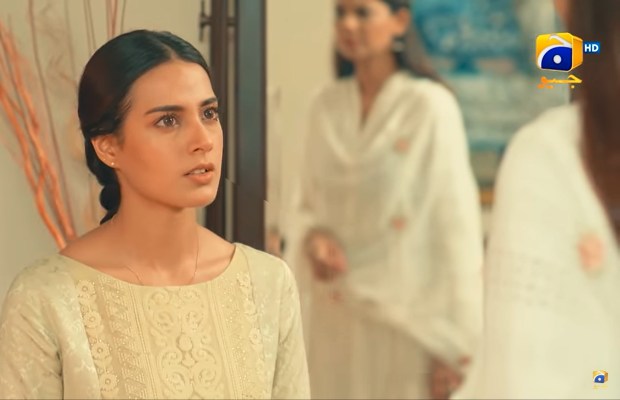 The latest episode begins with Mahi refusing to accept Sahiba’s claims. She says she is Taimoor’s widow and has no right to fall in love or be happy especially after what she did that led to the destruction of two families.

Mahi’s family discusses her mother-in-law’s proposal for Sikandar. While Nazim Shah agrees immediately because joining hands with Sikandar will help his political career, Mahi’s parents feel they will ask about Mahi’s will first.

Farhad meets Romana and delivers Sikandar’s message to her. She tells him to tell Sikandar that people whose souls have intertwined never drift apart from one another although sometimes their physical selves do separate from one another.

Back at the shrine, the faqeer leaves and entrusts his duties and responsibilities to Farhad.

Mahi’s family talks to her about her marriage to Sikandar. They tell her to think about it and if she agrees to it, only then will they move forward.

Sahiba talks to Nazim Shah about this marriage because she is aware of Mahi’s feelings for Farhad. He says Mahi will have to marry Sikandar or someone else of their stature or she will never get married again.

Romana and Chanda are catcalled and harassed on the street by locals in their area. She is disturbed and wishes these people would leave them alone.

The episode ends with Farhad taking over the shrine’s responsibilities. He is told that the people of the Sikandar’s mansion have sent for the faqeer who instructed them that whenever they get a call from there, they must go. Farhad is nervous because he knows he will have to face Mahi again.

The episode showed us the battle going on inside Mahi’s head. She knows Sikandar’s proposal is the best-case scenario but she can’t stop thinking about Farhad and the love he has for her. Iqra Aziz’s performance has been consistently good from the very beginning and the same can be said for the rest of the cast.

It will be interesting to see if Mahi will actually get married to Sikandar or fate has other plans for her. To find out, keep watching Khuda Aur Mohabbat on Fridays at 8 PM, only on Geo TV.