The episode ends with Mahi talking to her sister-in-law about how she can’t make her mother unhappy. 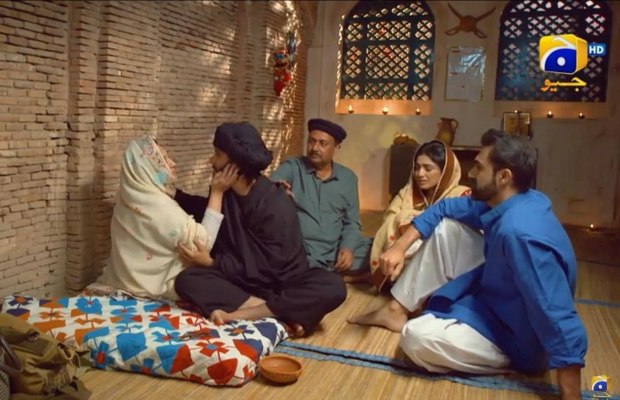 The latest episode of Khuda Aur Mohabbat begins with Farhad’s family finally meeting him again for the first time at the shrine. Her mother is begging the ‘faqeer’ to bring her to her son and is left dumbfounded when she realizes that it is actually Farhad. At that moment, her happiness knows no bounds as she quickly hugs him tight and cries with joy.

Nazim Shah sends his men to the shrine and strictly asks them to report any suspicious acts Farhad might be involved in. At the same time, Farhad’s family still can’t believe that he is alive and had been at the shrine for all this time.

Farhad further complains to his mother for believing he was gone in the first place. His mother then decides to stay at the same shrine with him.

His family further tries to convince him to come back home with them and forget the past mistakes, however, his father voices his support for him no matter what his decision might be. Both his parents are proud of him and how far he has come with his struggles.

On the other hand, Chanda Jee tends to a sick Romana who seems to have given up on everything. Chanda jee tries to convince her to inform Sikandar of her condition but she refuses to let go and go back on her words.

At the haveli, they can’t help but wonder what must have led to Farhad’s current predicament at the shrine. Their suspicions keep on growing and this does not look like a good sign for Farhad. Nazim Shah’s curiosity keeps on increasing and he asks his men to keep a sharp eye on Farhad and everything he does.

Mahi is still distressed and keeps remembering the dua Farhad gives to her at the shrine. Farhad also remembers Mahi and what she said to him about him returning back to his life.

Mahi leaves to go back to her father’s house with her sister-in-law and mother. Her mother-in-law expresses how her haweli will turn sad after Mahi leaves.

Farhad has a talk with the faqeer discussing why he is there at the shrine and what his purpose there is.  He tries to understand why God led him to this path and if there is any big reasons behind it.

Nazim Shah’s men continue to keep an eye on Farhad and their curiosity keeps on growing. On the other hand, Mahi is back at home and her mother is worried about how she keeps to herself and stays quiet most of the time.

Nazim Shah wants to find out what girl Farhad fell in love so deeply with that he left his whole life behind.

The episode ends with Mahi talking to her sister-in-law about how she can’t make her mother unhappy. Her sister-in-law on the other hand is trying to convince her to think of her own happiness and of Farhad. Mahi blames herself for everything that has happened to Farhad and her decision about her life is still unclear.

Will she finally accept what is in her heart and go for it or keep trying to make others around her happy? Despite so many difficulties, fans are hopeful that Farhad and Mahi may end up together. To find out what happens next, keep watching Khuda Aur Mohabbat every Friday at 8 pm only on Geo Entertainment.