Hanan cannot bear any misbehavior to his mother 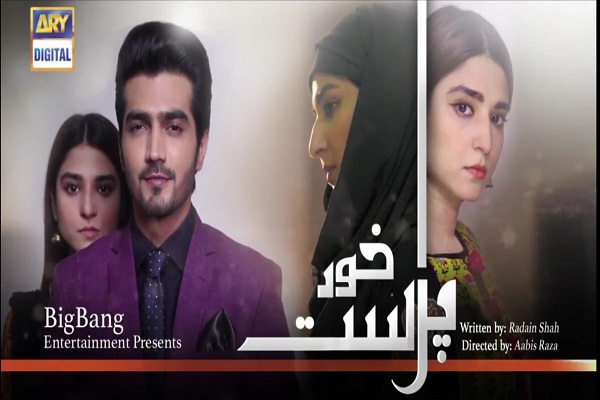 Another episode of Khudparast on aired on ARY Digital and the story has now became more interesting. The clash between modern and conservative ideas is portrayed such artfully where extremes are shown. Uswa who used to be an outstanding girl is now forced to observe Hijaab. Her family’s greed has forced her to live a life she has never dreamt of. Ramsha khan, Asma Abbas, Shehzad Sheikh and even Nousheen Shah have given brilliant performances in Khudparast and the play is well scripted by Radain Shah and brilliantly directed by Syed Aabis Shah.

The hard time for Uswa begins when her mother lies that maybe Uswa is pregnant and later when an excited Hanan got the reports in negative, he looses his mind and he starts yelling at her and ends up throwing her into the swimming pool. It is a super shock for her as her soul is completely shattered on such violent behavior, she has been punished for the sin she herself has not committed.Later when Hanan cools down and he tries to make her feel comfortable Uswa speaks her heart out to Hanan telling him that all she needs is love and good treatment from him.

Uswa tries to complain about Hanan’s behavior to her mother and sister but they are just asking her to adjust well and try to endure the hardships of her married life. Even when she talks about it with her brother he is more concerned about the business Uswa’s brother in law Moiz promised to start with him. In short poor Uswa is finding herself helpless and she feels herself shackled in that hypocritical and self righteous environment where her own husband is not on her side.

Hanan on the other side is too ashamed on his behavior with Uswa, one of his friend suggests him that he needs to give more time to Uswa and he should not need to always follow his mother’s instructions. Hanan takes his friend advice seriously and takes Uswa out on a beach walk at night and he dares to switch off his phone for which he has to pay a very heavy price.

Bakhtawar is extremely furious on the fact that Hanan is not picking his call. On their arrival she spits all her venom on Uswa but this time Uswa cannot keep herself quiet. She backfires at Bakhtawar in a very harsh tone telling her that why she always target her. Hanan is super furious on the fact and he takes Uswa to her home but she is not ready to be silent, she for the first time confronts Bakhtawar and Hanan is not ready to accept such behavior from her side, he throws her out of the room.

What will happen next? Will Hanan’s behavior upset Uswa or will she change for the better? Khudparast is a rather exciting story and has us hooked to it for now.

tweet
Share on FacebookShare on TwitterShare on PinterestShare on Reddit
Rameeza NasimNovember 20, 2018
the authorRameeza Nasim
Rameeza Nasim, a Paralian, passionate about poetry, drama and fiction. By giving drama critiques I feel like I am endorsing the writer's message to the audiences, I love my job. Being a critic responsibility lies on my shoulders to point out the flaws and shortcomings of the play be it on writer's , performers or director's end . I did my Masters in English Literature and Linguistics .
All posts byRameeza Nasim