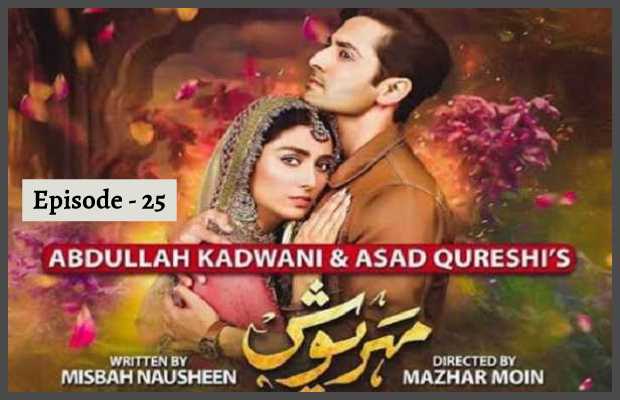 Meher posh the drama serial airing at GEO Entertainment airs its another episode. In this episode, Shah Jahan is nikahfied to Ayat in a hasty manner. The most unsatisfying part is when Shah Jahan saves Mehru from marrying that shady man and then once again he proposes her, she refuses him again just for her selfish sister. Danish Taimoor and Ayeza Khan’s performances are brilliant but Sania Saeed’s outshines.

In this episode despite Shah Jahan’s warning Mehru that the man she is marrying is not good, she is still marrying that man when Shah Jahan with the help of Naeem gets enough evidence against Mehru’s fiance. The guy is involved in heinous crimes including drug dealing and human smuggling. He used to trap girls in the name of marriage and then use then for criminal purposes.

Shah Jahan informs the Police and right in the middle of the function, Police raids at the function and arrests the mother and the son telling that they are drug dealers and they trap girls and are also involved in human trafficking. Mehru is once gain broken to hear this and her mother is really worried. Shah Jahan’s friend advice him to once again propose Mehru as he is sure that this time she will not be able to say no.

Shah Jahan has mustered some courage and he once again offers Mehru to marry him, she again refuses him saying that how can she marry her sister’s fiance what will the world would say. She is once again sacrificing her love for her selfish sister. Not for a single second, she is thinking that by forcing Shah Jahan to marry someone he does not love, she is putting him in pain and she is doing no good for her sister too as she will never going to be happy with him.

Shah Jahan’s mother once again tries to manipulate things according to her wish. She forces Mehru’s mother to marry off Ayat with Shah Jahan as soon as possible. Mehru’s mother is shocked at her demand that in such a situation how can she thinks of marrying off Ayat but Ayat insists that she is happy and wants to get married. Ayat and Shah Jahan’s nikkah scene is the most unsatisfying part of this episode we are expecting that something going to happen and this Nikkah will not happen but it takes place. Now Mehru and Shah Jahan’s relationship has become sacred and their love has become forbidden.