Ayat is wrongly accusing Mehru in front of her mother 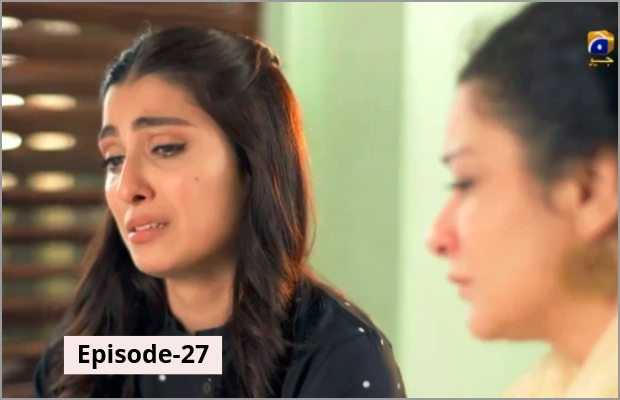 Meher Posh GEO Entertainment drama serial is turning more and more ugly and disturbing, sister rivalry is at its peak. Ayat so meanly and shamelessly lying about Mehru to her mother, accusing her of pressurizing Shah Jahan to marry her. Sania Saeed performance is shining out in this whole episode, Ayeza Khan and Danish Taimoor’s performances are impressive too.

The form of sister rivalry shown in Ayat is quite disturbing, having raised by parents like Master Sahab and her mother she has turned so vile. She has so much venom against her own sister. Shah Jahan is continuously giving her a reality check. He is not talking nicely with her and he in clear words has told her that he does not want to get close to her. What else Ayat wants to hear, she is so void of self-respect that she is not ready to accept the reality that Shah Jahan loves Mehru not her.

The conversation which Mehru and her mother had when Mehru brings birthday cake for her is so heart touching. The way Mehru is speaking her heart out and telling her mother that how she is badly missing her father and then asking her mother how she feels without him. The way Mehru’s mother explains her loneliness is so heartbreaking but when she says that Master Sahab is always with her, she still makes two cups of tea, one for her and one for him, speaks volumes about her bond with her husband.

Ayat is so mean and selfish that she lies about Mehru to her mother, telling her mother that Mehru is continuously pressurizing Shah Jahan to marry her. Her mother does not believe in this crap. She shamelessly tells her mother that Mehru should not show up in front of Shah Jahan and his mother. The way Ayat has turned into a hateable character and her hatred against her own sister is so much disgusting. I am wondering where this play will lead to? Will Shah Jahan eventually accept this venomous Ayat on Mehru’s demand or will he marry Mehru and for that, he has to divorce Ayat first.

tweet
Share on FacebookShare on TwitterShare on PinterestShare on Reddit
Rameeza NasimOctober 5, 2020
the authorRameeza Nasim
Rameeza Nasim, a Paralian, passionate about poetry, drama and fiction. By giving drama critiques I feel like I am endorsing the writer's message to the audiences, I love my job. Being a critic responsibility lies on my shoulders to point out the flaws and shortcomings of the play be it on writer's , performers or director's end . I did my Masters in English Literature and Linguistics .
All posts byRameeza Nasim