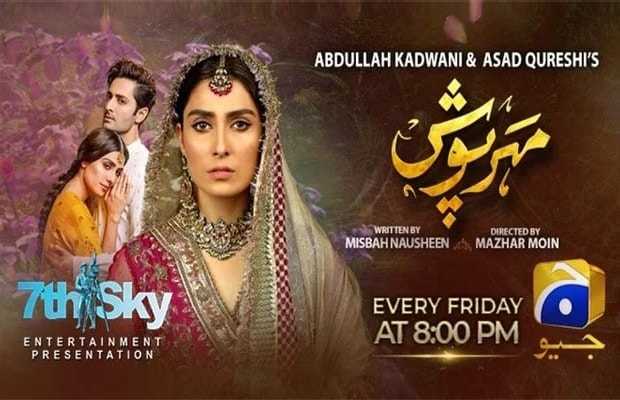 Meher Posh the drama serial running at GEO Entertainment has aired its another episode, the play besides being an intense love story makes no sense at some places. There was too much negativity in this play and Shakeela Chachi’s absence from the scene is now a huge relief, the episode seems less toxic. Ayeza Khan and Danish Taimoor both are giving brilliant performances in this episode and Ali Abbas’s performance is also very impressive.

The episode begins when Shah Jahan’s mother is insulting Mehru shaming her marital status saying that no matter what she does, she is never going to allow a divorcee to marry her son. On one hand, she is hating Mehru so much and on the other hand, she is showering her love to Ayat who is her sister and from the same family. Why so much discrimination? It is certainly making no sense.

Naeem’s situation is extremely sad one but his attitude truly makes him deserve this pain. Shakeela Chachi has seeded the doubts in his mind but the way he used to insult Mehru and her family, trashing her in front of her neighbors and on-street even after divorcing him is reflecting his indecent and ugly self. Mehru’s father dies because of his insensitivity and now he wants to compensate for all this damage. The way her mother meets Mehru and offers that Naeem will bear all the expenses of her marriage is like torturing the poor Mehru even more. It is not helping her.

Mehru has developed some soft corner for Shah Jahan, she has realized that he has been beside her all the time. However, Shah Jahan’s mother does not spare any moment to insult Mehru and Shah Jahan has sensed this hatred for Mehru in her mother’s eyes and tone. He clearly tells her mother that she should correct her tone otherwise she will going to lose her son. Will Shah Jahan be ever able to make his mother accept Mehru as her daughter in law?

tweet
Share on FacebookShare on TwitterShare on PinterestShare on Reddit
Rameeza NasimJuly 13, 2020
the authorRameeza Nasim
Rameeza Nasim, a Paralian, passionate about poetry, drama and fiction. By giving drama critiques I feel like I am endorsing the writer's message to the audiences, I love my job. Being a critic responsibility lies on my shoulders to point out the flaws and shortcomings of the play be it on writer's , performers or director's end . I did my Masters in English Literature and Linguistics .
All posts byRameeza Nasim