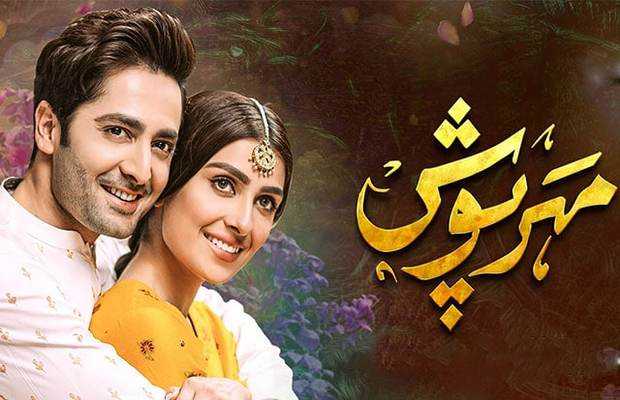 Meher Posh the drama serial running at Geo Entertainment is now turning a bit pleasant with Mehru and Shah Jahan’s romantic scenes. Aiza Khan and Danish Taimur both make a super gorgeous couple and it is a treat to see them together romancing on-screen. This episode has shown major development with Shah Jahan for the very first time proposes Mehru in a hasty manner, he tells in front of people on Shifali’s wedding function that he will marry Mehru soon, leaving Mehru shocked.

The episode begins with Mehru and Shah Jahan’s romance. It seems that Mehru has started developing some feelings for him. She is happily attending Shifali’s wedding function but then Shifali’s mother out of nowhere starts shaming Mehru as a cursed woman and stops her for proceeding for the Mehndi rituals for being a divorcee. Well, this is the 21st Century and Shifali’s family seems a very emancipated family saying these kinds of things to a guest.

Well, here Shah Jahan appears as a hero, and as he rescues Mehru from Shifali’s mother’s cursing who God knows why is doing this on her own daughter’s wedding spoiling the function, creating a scene and hurting a girl unnecessarily calling the wrath of God. Shah Jahan in front of all the people and Shifali’s mother tell them that he is going to marry Mehru, leaving Mehru in a jaw-dropping shock. Mehru clearly knows that it is Shah Jahan who has said this inflow of emotions but his mother will never accept her.

Well on the other side Shah Jahan’s mother is cooking another game, she has taken Ayat on shopping and tells her to buy whatever she likes and then calls Shah Jahan to help her out and leaves them alone in the mall. Well never for a single second Shah Jahan has realized that why her mother is being so nice with Ayat and why she is being so fond of her? She also bought a suit for Mehru and tells Ayat to give it to her. Never ever Ayat has felt that Shah Jahan’s feelings are inclined towards her sister.

Mehru is super happy to see her dress, she is already dreaming about Shah Jahan, despite knowing that his mother will never let this happen. She wears the dress the very next day which says loud and clear that Mehru is also in love with Shah Jahan, he notices her and praises her and he takes her on his first drive in his newly bought car. What will Shah do when he will find out that his mother is trying to pair up him with Ayat?

tweet
Share on FacebookShare on TwitterShare on PinterestShare on Reddit
Rameeza NasimAugust 4, 2020
the authorRameeza Nasim
Rameeza Nasim, a Paralian, passionate about poetry, drama and fiction. By giving drama critiques I feel like I am endorsing the writer's message to the audiences, I love my job. Being a critic responsibility lies on my shoulders to point out the flaws and shortcomings of the play be it on writer's , performers or director's end . I did my Masters in English Literature and Linguistics .
All posts byRameeza Nasim