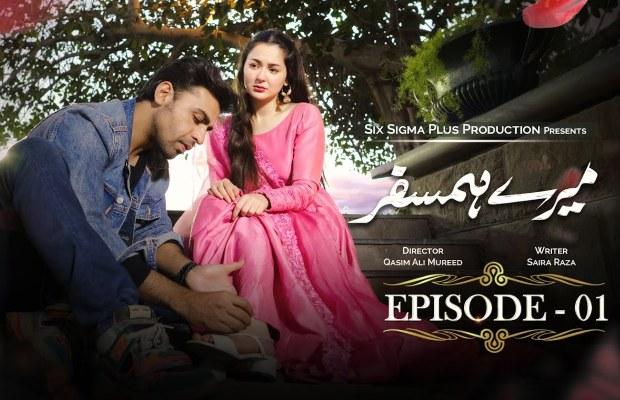 ARY Digital’s newly started drama serial Mere Humsafar seems like an interesting family drama. The play is written by Saira Raza and it is directed by Qasim Ali Mureed before this we have seen his directorial venture Prem Gali at ARY Digital. It has Hania Amir and Farhan Saeed in the leading cast. The other cast includes Samina Ahmed, Waseem Abbas, Saba Hameed, Tara Mehmood, and others.

The opening scene of the play is quite loud with the super grumpy Raees (Waseem Abbas) yelling his lungs out at his wife (Saba Hameed) blaming her for making him late for office. The household environment is quite toxic and there is a manipulative mother-in-law in the house whose main job is to tease her daughters-in-law.

There are two brothers in the household, Raees, and Jalees, and their wives Shahjahan (Saba Hameed) and Sofia (Tara Mehmood) are two sisters and they are married with their Phupho’s sons. However, Saas is like a typical Saas she is nothing like phupho. Raees does exactly what his mother tells him to do, for him his wife means nothing to him. Shahjahan has given him money from her own pocket money to buy books for her son but he has bought medicines for his mother with the same money.

Well, looking at their house and lifestyle they seem like a decent middle-class family and for such a family buying medicine and a book seems like a petty thing. Even at one place, Shahjahan is suggesting her husband take a loan which sounds so hilarious that for buying a book and medicine he needs to take a loan. Anyway, we have not seen the lead cast anywhere it seems that it is their backstory about their childhood. There is a loud argument scene going in the house, mother in law is creating a huge drama when her third son makes his entry.

Nafees Raees’s brother enters the house with his little daughter Hala, he lives aboard, he has divorced his foreign wife and she has left Hala with him. Now he has remarried and his new wife is not ready to keep Hala so he has returned home so that he can leave Hala in the house. However, no one is ready to keep the girl. Nafees begs everyone to please keep his girl in the house. He brings gold bangles and earrings for his mother which eventually changes his mother’s mind otherwise she is not ready to keep Hala. Now she tells everyone shocking them all by saying that Hala is going to live with them.

tweet
Share on FacebookShare on TwitterShare on PinterestShare on Reddit
Rameeza NasimJanuary 1, 2022
the authorRameeza Nasim
Rameeza Nasim, a Paralian, passionate about poetry, drama and fiction. By giving drama critiques I feel like I am endorsing the writer's message to the audiences, I love my job. Being a critic responsibility lies on my shoulders to point out the flaws and shortcomings of the play be it on writer's , performers or director's end . I did my Masters in English Literature and Linguistics .
All posts byRameeza Nasim