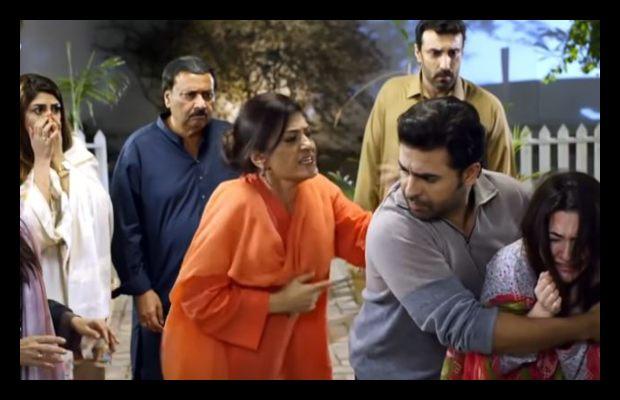 Mere Humsafar the drama serial airing at ARY Digital is getting interesting with Farhan Saeed as Hamza is adding colors to this depressive Cinderella-themed narrative. Farhan Saeed and Hania Aamir’s chemistry are spectacular. In the previous episode, we have seen that Hamza is smitten by Hala’s innocence. In this episode we have seen Hamza being vocal, taking a stand for Hala.

Well to our surprise Shahjahan does not exert her wrath on poor Hala after whatever she has heard from Khurram about Hala and Hamza’s chemistry at the hospital. However, that vile Roomi’s practical joke has trapped poor Hala into a greater mess. Roomi’s practical joke has gone too serious well one wonders how come that stupid van driver has never figured out that it was Roomi, not Samreen’s voice.

Samreen is not aware of what Roomi has done. Roomi bunked the day just because to get alone in the van with that driver. The driver has started getting creepy and cheesy, Samreen is astonished that why he is behaving like that. When the driver crosses his limit and Samreen slaps hard on his face and start calling people for help. The van driver has taken this insult to his heart and he reaches Samreen’s house.

The van driver barges into the house calling Samreen’s name and threatening her which seems quite unnatural as usually, loafers don’t have that sort of courage to face anyone’s family like that. Hamza comes forward and shows him way out there the guy tells him that she used to call him and she use to tell him that her Tayee is so cruel and blah blah, everyone started blaming Hala. Shahjahan is the first to name and blame her even deep inside she knows that it is Roomi’s blunder. For the very first time, Hala speaks up in her defense saying that she doesn’t even have her phone it must be Roomi on which Taya gets furious.

Taya is throwing Hala out of the house when Hamza intervenes and takes her side. He says that he knows Hala cannot commit such actions and he will investigate Samreen’s phone. Samreen’s father says that now after this who is going to accept her daughter on which Shahjahan says that she will soon announce Hamza and Samreen’s engagement. Dadi says that it is actually Hala who has suffered the most making Shahjahan furious. In the middle of the night, Shahjahan throws Hala out of the house. The very next morning Hamza finds out Hala getting scared from a dog on street, there he learns that she has been thrown out of the house. Hamza brings her back and for the very first time, he goes against his own family.

tweet
Share on FacebookShare on TwitterShare on PinterestShare on Reddit
Rameeza NasimMarch 15, 2022
the authorRameeza Nasim
Rameeza Nasim, a Paralian, passionate about poetry, drama and fiction. By giving drama critiques I feel like I am endorsing the writer's message to the audiences, I love my job. Being a critic responsibility lies on my shoulders to point out the flaws and shortcomings of the play be it on writer's , performers or director's end . I did my Masters in English Literature and Linguistics .
All posts byRameeza Nasim