Its 4th episode and still we have not seen Farhan Saeed 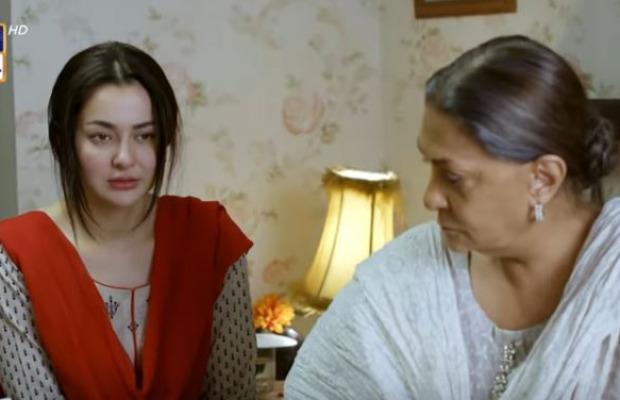 Mere Humsafar Ary Digital’s drama serial seems to lack novelty and unfortunately, it is not less than any other Bechari Larki regressive story. Hania Amir’s performance is good but in a few places, it seems too much over the top posing to be too bechari. In the previous episode, Hala is not less than Cinderella. In this episode too she continues to be that but one wonders why she is enduring all this cruelty?

Well, in which world Hala is living? Why she is bearing all this cruelty and injustice? Why she don’t tell her father about what she is going through? Why does she have no spine to speak up for herself? Why when her father has sent her cellphones she has given to her cousin? Why these are all the big questions that arises when I watched this regressive play.

Well, one thing is for sure Hala’s cousins are not much against her like her Tayee. Samreen talks with her in a friendlier tone. She tells her that his father is online and then she asks her to talk with his father. Samreen lets her talk to her father, she is talking when Raees yells at her. Well, I am wondering if Nafees has not heard him shouting too? What kind of father is he? this is all so unbelievable.

Hala is too dumb that she is being fooled by that good-for-nothing guy her best friend’s cousin. He is clearly just passing time with her. The way he treats her in the car is so mean and selfish. We are wondering where is Farhan Saeed’s character? We anxiously want to see Hamza in the story as we really do not like this guy. Hala has disappointed us when she silently hears all his insults why don’t she break up with him giving him a shut-up call?

Hala wants a new dress but Dadi gives her an old dress. Samreen tells Hala to wear her dress she wears it despite knowing how bad her Tayee will going to react. Some guests have arrived to see Rumi in the house for her proposal. Hala is too naive and dumb that she all dolled up enters into the drawing-room in front of all the guests. The guests liked Hala and selects her instead of Rumi. This whole thing is something we have already seen on TV many times. There is nothing novel about the script.

tweet
Share on FacebookShare on TwitterShare on PinterestShare on Reddit
Rameeza NasimJanuary 21, 2022
the authorRameeza Nasim
Rameeza Nasim, a Paralian, passionate about poetry, drama and fiction. By giving drama critiques I feel like I am endorsing the writer's message to the audiences, I love my job. Being a critic responsibility lies on my shoulders to point out the flaws and shortcomings of the play be it on writer's , performers or director's end . I did my Masters in English Literature and Linguistics .
All posts byRameeza Nasim