Abdullah and Mahjabeen are a match made in heaven 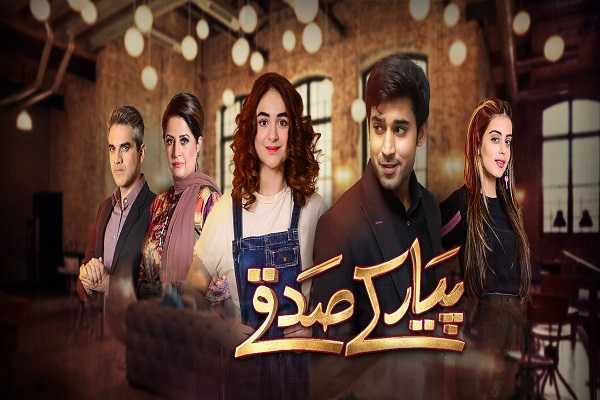 In this episode a much desired happy ending - OyeYeah Drama Reviews
0Share
1.52KViews

HUM TV’s Pyar Ke Sadqay, one of the classiest drama serials has finally come to an end. The play ends on a desired ending, its a happy end showing Abdullah and Mahjabeen’s union, they seem a match made in Heaven. Abdullah and Mahjabeen’s romance is the cutest one we have ever seen on screen. The play is a milestone in the history of the Pakistani drama industry in terms of its unique story and its treatment, moreover, the execution and casting of the play are also perfect, powered by impeccable performances.

Yumna Zaidi and Bilal Abbas have given their best of the performances till date and they both have proved themselves as one of the finest actors of our industry. Supporting cast is equally brilliant Malik Raza, Omair Rana, Atiqa Odho, Salma, and particularly the girl Srha Asghar who played the role of Washma, she has done an outstanding performance. Kudos to the entire team of Pyar Ke Sadqay for coming up with such a masterpiece.

Pyar Ke Sadqay is unique with its storyline and the treatment of the play, for the very first time the protagonists of the play are shown as slow learners and throughout the play, we see a considerable growth of both the characters and how they both are perfectly complementing each other. Throughout their struggle and journey, their relationship is very cute and beautiful. It is one of the most beautiful romances we have recently seen on TV.

The play has touched many heavy subjects and themes but in a very subtle manner, the play has not like torture to the audiences like other issue-based plays. The initial episodes were very delightful something that a perfect Prime Time Watch should be like. They have so artfully touched the theme of harassment that its intensity is felt without torturing the audiences with the prolonged scenes of Mahjabeen’s helplessness or miseries. She has quite bravely faced Sarwar and she has never surrendered.

Mansoora has fully understood Sarwar’s ugliness and she has left him. She seeks forgiveness from her children on her past conduct and negligence, but she also owes an apology to Mahjabeen and her mother as she is the one who has wronged Munshi Jee the most. Who had worked for her for his whole life but she did not happen to care and now she pays a visit to Mahjabeen and her mother and personally apologizes for her cruelty. She gives Abdullah the right to make all the decisions and also to decide with whom he wants to live Shanzay or Mahjabeen. Sarwar gets the desired punishment he tries to trap Mansoora back but in a flow of passion, he calls her Mahjabeen instead of Mansoora. Sarwar’s game is certainly over.

Abdullah has grown as a character, one of the most satisfying scenes is one where he says shut up to Shanzay and says that he cannot hear anything against his wife. Even Shanzay agrees that Abdullah and Mahjabeen are made for each other. Another most satisfying scene is when Abdullah slaps hard on Sarwar’s face to protect Mahjabeen. This is the most deserved slap and the stand which Abdullah should have taken much earlier to protect his wife. Abdullah and Mahjabeen are soulmates. Kudos to the entire team for coming up with such a masterpiece, a play to be remembered in the history of the Pakistani drama industry.

tweet
Share on FacebookShare on TwitterShare on PinterestShare on Reddit
Rameeza NasimAugust 13, 2020
the authorRameeza Nasim
Rameeza Nasim, a Paralian, passionate about poetry, drama and fiction. By giving drama critiques I feel like I am endorsing the writer's message to the audiences, I love my job. Being a critic responsibility lies on my shoulders to point out the flaws and shortcomings of the play be it on writer's , performers or director's end . I did my Masters in English Literature and Linguistics .
All posts byRameeza Nasim