We get to see a dark streak in Mahajabeen's character 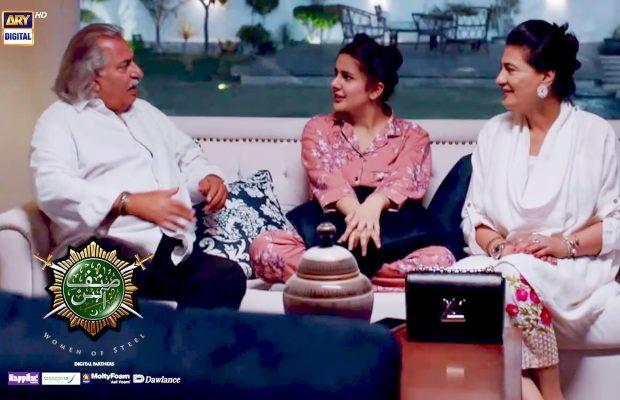 Sinf e Aahan the ISPR Production at ARY Digital, besides being so refreshing in its narrative and treatment is also glorifying PMA. At some places that glorification is so obvious! In the previous episode, we have seen Rabia and Nathemy Perera’s cute moments and also how PMA has empowered all the girls. In this episode, it is shown how all the girls are spending quality time during their mid-session break.

The episode begins with Nathemy Perera writing a letter to her mother from Rabia’s house. She is recalling her visit to Northern areas in which we get to see some breathtaking scenic views. One wonders where has Rabia gone because Nathemy is shown alone in those scenes. She writes a very elaborate letter praising Pakistan and its people.

Arzoo’s giving that toxic Nauraiz a cold shoulder is the most satisfying thing in this episode, the way she tells him that he is no more important in her life. Her life priorities have changed after joining PMA, marriage, and Nauraiz is no more on her top priority list. Nauraiz is a true opportunist kind of guy when Arzoo has nothing in her life he is just using her as time pass and when he has seen her become an army officer he is ready to marry her. Great that Arzoo ignores him.

Pariwesh has yet another proud product of PMA, the way she refuses the ride by Sardar Sahab, her choice of words and guts all are on spot. Even Sardar has also acknowledged her self-respect, so far Sardar’s character is shown not in a very negative light. Mahajabeen is trying to spend quality time with her family, well PMA has changed Mahajabeen but how come her parent’s relationship with each other improved?

Well PMA has polished and tamed almost all the girls except Shaista! It seems that she has become proud and selfish after joining PMA. A person’s worth is not judged by his degrees. What if Kamil does not have equal degrees as compared to Shaista? he is a forward-looking, liberal, and most importantly a thorough gentleman. The way he takes a stand for her and then the way he convinces her father for sending Shaista to PMA he certainly does not deserve to be treated like this just because he is not holding degrees? Even Shaista’s father is thinking like her. Their ungrateful attitude is very disappointing. We get to see a negative streak in Mahajabeen’s character when we get to know that she tells Nasar that Rabia is bipolar as an act of revenge just because she is finding another girl for her brother? Well, the rivalry is now making some sense. Let’s see how the next session at PMA begins.

tweet
Share on FacebookShare on TwitterShare on PinterestShare on Reddit
Rameeza NasimMarch 7, 2022
the authorRameeza Nasim
Rameeza Nasim, a Paralian, passionate about poetry, drama and fiction. By giving drama critiques I feel like I am endorsing the writer's message to the audiences, I love my job. Being a critic responsibility lies on my shoulders to point out the flaws and shortcomings of the play be it on writer's , performers or director's end . I did my Masters in English Literature and Linguistics .
All posts byRameeza Nasim