Sinf e Aahan Episode-10 Review: Girls are charged with the spirit of Patriotism

Major Osama elaborates the concept of our National Anthem 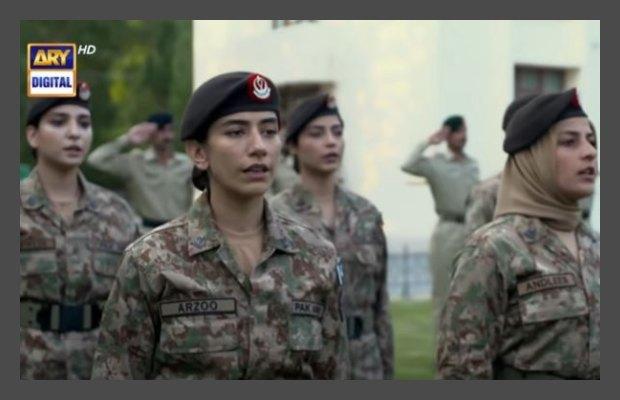 ISPR production Sinf e Aahan is our favorite weekend watch, it’s refreshing nothing like the typical Saas Bahu saga. Its mega cast is loaded with power-packed performances. In the previous episode, we have seen the daily training routine of the girls at PMA. In this episode, it is shown that girls are super charged with the spirit of patriotism when Major Osama shares with them the concept of our National Anthem.

The episode begins when LC Mahajabeen is reciting National Anthem, she recited it flawlessly but there is little attendance. When Major Samia asks about them the girls missing they come up with all silly excuses the funniest one is with Shaista when she is asked that ” Bukhar aab kahan gaya?” and her reply is so cute “Abhi tu yehin tha”.

One of the strangest things Major Osama’s wife does is that when her old friend meets her after a long time she actually hides from her the fact that she is being married to Major Osama and also she does not tell her about hir first husband’s martyrdom. Why she is hiding such an obvious fact from her friend just because she does not want to tell her that she is Major Osama’s wife as she has not accepted him by heart? There are a few refreshing scenes in this episode when in parallel girls’ parents are shown bragging about their daughter’s brightness and on the other hand, girls are shown getting snubbed at their PMA training.

Mahajabeen is asked to elaborate the meaning of our National Anthem by Major Osama, she replied she does not know that. Rabia tries to be smart she starts narrating the anthem’s exact translation on which Major Osama stops her by saying that he does not want the translation he wants the concept. Strangely no one knows the concept of Pakistan’s National Anthem. Major Osama very eloquently elaborates the true essence of our National Anthem. All girls are getting inspired by Major Osama’s lecture and now they are all charged with the spirit of Patriotism and they all are ready to sacrifice their lives for their Motherland.

tweet
Share on FacebookShare on TwitterShare on PinterestShare on Reddit
Rameeza NasimJanuary 31, 2022
the authorRameeza Nasim
Rameeza Nasim, a Paralian, passionate about poetry, drama and fiction. By giving drama critiques I feel like I am endorsing the writer's message to the audiences, I love my job. Being a critic responsibility lies on my shoulders to point out the flaws and shortcomings of the play be it on writer's , performers or director's end . I did my Masters in English Literature and Linguistics .
All posts byRameeza Nasim