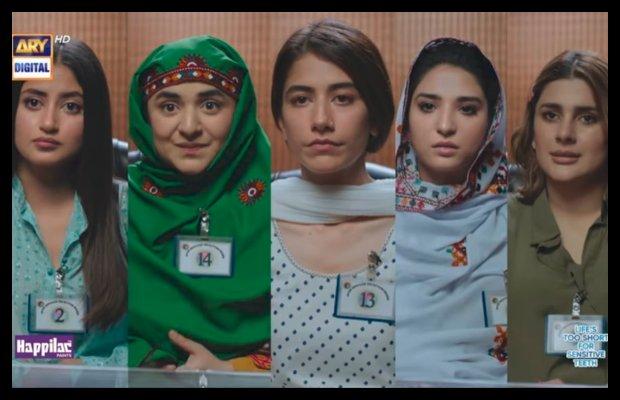 The next step is the huge wall which everyone has to climb and cross over. No one could perform this task on her own, Mahajabeen has lost her nail and it seems that she is more worried about her broken nail. Arzoo is the only girl who performs this task with the help of girls. Syeda Sidra Batool blows wazifas on everything and tries to create blessings in every task. Her rosary in her hand is quite a stretch however she is a good comic relief.

Then there is a task where groups are made and a commander is also appointed who has to select her team members and they all should carry a given task as a group. Syeda Sidra’s group having her as a commander have Pariwash, Arzoo, and Rabia but the group fails to fulfill the given task as Rabia trips down in the end. Shaista and Mahjabeen’s group completes the task. Then there is a very interesting interview session in which we really enjoyed Mahjabeen’s comparison of humans and dogs.

Well, all five girls are heading towards achieving their dream. Yes, they all get selected and they have cleared their first phase at ISB Gujranwala Garrison Academy now they will be further examined in Rawalpindi. The gem of the scene is when Shaista’s father eventually accepts Shaista’s passion for Army and that he feels proud of her daughter. Their interaction is the golden moment of the play. The girls are making their parents proud. Pariwash’s mother and her father’s scene is also very heart-touching. Pariwash’s mother is also feeling proud of her daughter’s success. Mahanjabeen is a brat she is a bit aloof with her parents she does not clearly share with them that she has been selected. The first phase in the way of achieving the dream for the girls has been cleared!