Ajju and Rafaqat have played a dirty game to corner Tabeer 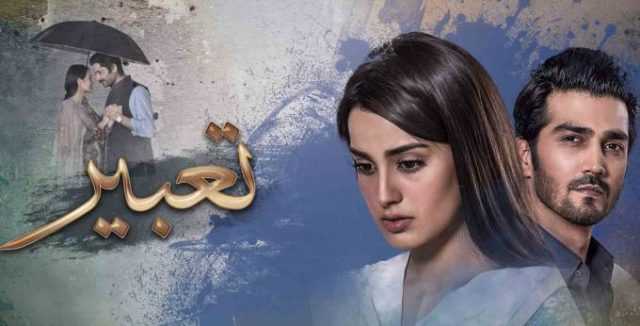 Over the period of time, the story of Tabeer has shown major development. From a cornered, shy girl, Tabeer has been blossoming under the care of Fawad and it seems, the two are finally moving ahead from their wounded past. Coming together as one.

However, this week’s episode was more about Rafaqat and Ajju’s planning of getting Tabeer married to Ajju once and for all.

The episode begins when Rafaqat  is assuring Ajju that he will arrange his marriage with Tabeer. Ajju is high not only on emotions but whatever he is consuming as well and so, he keeps on threatening Rafaqat to get things done. One thing which seems awkward is the unconditional support of Rafaqat for his brother Ajju, I don’t understand why he is making so much efforts for Ajju even at the cost of sacrificing his own family and his marital bliss? Why can’t  he just leave  Ajju on his own? Why is he being blackmailed so openly by Ajju?

Well Rafaqat has proved that he is no less than Ajju and  in order to make Asma and Dadi agree for Ajju’s proposal, he devises a very evil plan. Rafaqat plots against his own wife by hiring a man and the plan is to blame her for her character and  then pressurize them to get Tabeer married to Ajju. And amidst the scheming, Asma falls prey to Rafaqat’s evil. However, what was astonishing was the fact that Dadi, who has brought up Asma and literally lives with her, doubts Asma. The instant reaction Dadi showcased did not go well with her character at all.

The only scene in this episode where Fawad and Tabeer appeared was the telephonic conversation. Love is very much in the air. Tabeer’s looking on to Fawad’s shirt and wants to do everything herself, which clearly shows she’s fallen in love with Fawad. On the other hand  Fawad is equally involved ( I still wonder where is his mother? ) Fawad invites Tabeer for an outing on which she agrees.

Where will their relationship leads to?  Will Tabeer and Fawad’s love story get materialize or will Rafaqat’s tactics  become successful and Tabeer will be pressurized to marry Ajju. Lets see what will happen in the next episode. Imran Ashraf’s story keeps you hooked to Tabeer one episode after another. We hope the pace remains the same and we get to watch a happy ending for Tabeer and Fawad after so many hardships.

tweet
Share on FacebookShare on TwitterShare on PinterestShare on Reddit
Rameeza NasimJune 27, 2018
the authorRameeza Nasim
Rameeza Nasim, a Paralian, passionate about poetry, drama and fiction. By giving drama critiques I feel like I am endorsing the writer's message to the audiences, I love my job. Being a critic responsibility lies on my shoulders to point out the flaws and shortcomings of the play be it on writer's , performers or director's end . I did my Masters in English Literature and Linguistics .
All posts byRameeza Nasim