Its been Top Gun: Maverick night at the Cannes 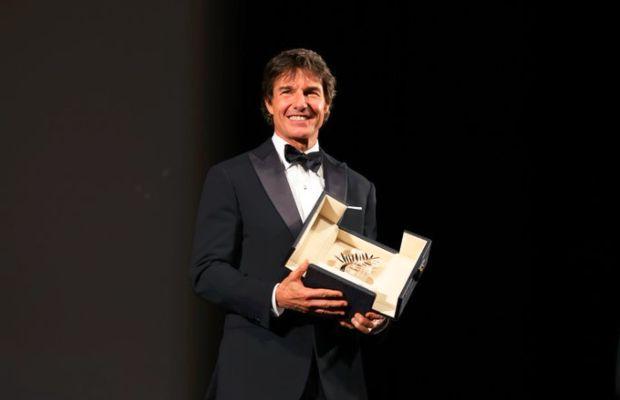 Tom Cruise was presented with a surprise Palme d’Or during its premiere at Cannes on Wednesday.

Both Tom and his film Top Gun: Maverick touched down on the Palais for a high-octane premiere last night.

Top Gun: Maverick  has already been winning rave reviews from critics ever since it made its world premiere earlier this month in San Diego atop the retired aircraft carrier USS Midway.

As Cruise arrived on the red carpet he has treated to a hero’s welcome wearing a Giorgio Armani for the 75th annual Cannes film festival at Palais des Festivals.

While the film received 5 minutes of a standing ovation at the Cannes premiere.

Since last night Tom Cruise is tending on the Twitter timeline for all the good reasons.

Tom Cruise with his Palme d'or d'honneur ahead of the screening of ‘Top Gun: Maverick’ at the 2022 Cannes Film Festival. pic.twitter.com/VzCd5yboUI

Tom Cruise waves to fans on the #Cannes red carpet before the premiere of #TopGunMaverick pic.twitter.com/JuO3xrFgfm

Tom Cruise gets his own standing Ovation as he enters the theater. #cannes #TopGunMaverick pic.twitter.com/zDBSC1Arjk

Top Gun: Maverick will be opening in cinemas on 25 May.