screenshots supposedly from an episode of The Simpsons featuring Justice for George Floyd imagery is making its rounds on Twitter. 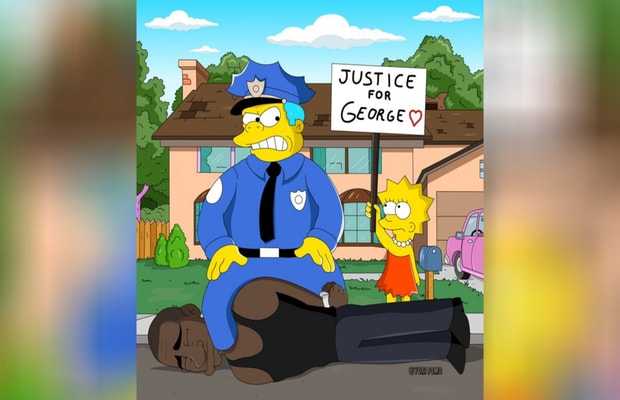 The Simpsons, the American animated sitcom created by Matt Groening for the Fox Broadcasting Company is not new for predicting many if the world’s events and it is freaking out millions around the globe.

The internet has been buzzing lately with the news of ongoing protests in wake of Black American George Floyd’s death in Police custody.

And adding more to it, people came out pointing out at a few predictions made by The Simpsons series.

Conspiracy theorists are surely going to delve deeper with this latest revelation, as screenshots supposedly from an episode of The Simpsons featuring Justice for George Floyd imagery are making rounds on Twitter.

Twitter users have shared the photos, left us wondering how the show was really able to predict the event that took place in the city of Minneapolis last week.

However, that’s not the case, the photos that seem to accurately depict Floyd’s death were actually created by an Italian vip-cartoonizer named Yuri Pomo.

For the past year, Pomo has been famous for turning many celebrities into Simpson’s characters after it started as a joke, according to a link he has added to his Instagram bio.

tweet
Share on FacebookShare on TwitterShare on PinterestShare on Reddit
Saman SiddiquiJune 3, 2020
the authorSaman Siddiqui
Saman Siddiqui, A freelance journalist with a Master’s Degree in Mass Communication and MS in Peace and Conflict Studies. Associated with the media industry since 2006. Experience in various capacities including Program Host, Researcher, News Producer, Documentary Making, Voice Over, Content Writing Copy Editing, and Blogging, and currently associated with OyeYeah since 2018, working as an Editor.
All posts bySaman Siddiqui