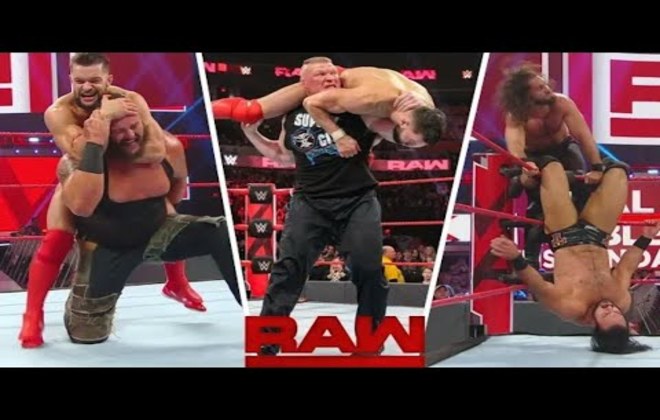 BROCK IS FINALLY HEREEEE !!!!  Paul introduced the champion BRRRROOOCCKK LLEEAASSNNEERRR!! Vince McMahon joins them, As he continues to speak Braun interrupts as he reached near the ring Brock starts playing games with him. A little later Finn Balor Music hits. Heyman’s spoiler alert this week: Even miracles fear Brock Lesnar. Vince made a match between Braun vs Finn. Which starts right now…

Finn vs Braun: The match was fun, Finn did damage both giants during the match. Nothing big but the match was actually fun to watch. Finn wins the match via Disqualification. Finn vs Brock will be the match to watch in Royal Rumble. I don’t know how Finn will win the match without bombs and explosives and guns but let see.

Intercontinental Championship Pose-Off:  They came in the ring and Leo (THE KID OF BOBBY) says that Bobby Lashley is better than Seth Rollins and others in the locker room. Apollo Crews makes his way to the ring and there we have it the next match after the SHORT COMMERCIAL BREAK :#

Apollo Crews vs Bobby Lashley: . Apollo did some funky stuff, but this didn’t get enough time to go anywhere. Not a huge fan of having two straight matches end with a competitor beating up a person at ringside until somebody hits a finisher. Bobby Lashley won the match via Pin Fall.

Bobby Lashley was doing his winning poses and suddenly we hear BUURRNNN IITTT DOOOWWWNNN!! Seth wasted no time and continue to march towards the ring a small stared down between Bobby and Seth.

Seth Rollins vs Drew McIntyre: It was solid, but was missing a little something to hit that. I’m sure these two have it in them, and we’ll see it at some point. This was a nice little match with some big moves towards the end.

*E-Chord Down Strock* Hello, I’m Elias. He started singing and yeah Baron Corbin hate so he comes and whatever…

Baron Corbin vs Elias: They again start booking the worst. Elias lost this match. Yeah, it was a match -_-

Raw Tag Team Championship Match With Curt Hawkins As Referee: Bobby Roode & Chad Gable vs. The Revival: I liked the story here. The Revival has had a valid complaint for the last few weeks, and this week they pulled out all the dirty tricks they could think of & couldn’t get the job done. Now they’re actually heels! It makes sense! The in-ring was pretty solid too. Somebody should tell somebody important that Roode & Gable are actually kind of fun as a team in the ring.

Ronda Rousey & Natalya vs. Sasha Banks & Bayley: I liked the layout of this match, with the champion & challenger on Sunday getting the best opportunities to look good, while Bayley & Natalya played their role & backed their partners up well. Much like the Universal Title match, it’s tough to see the challenger winning on Sunday. Sasha’s got other stuff going on and it’s not like anybody expects Ronda to lose the title anytime soon. That being said, they did more to sell us on Sasha winning than they did Finn winning.