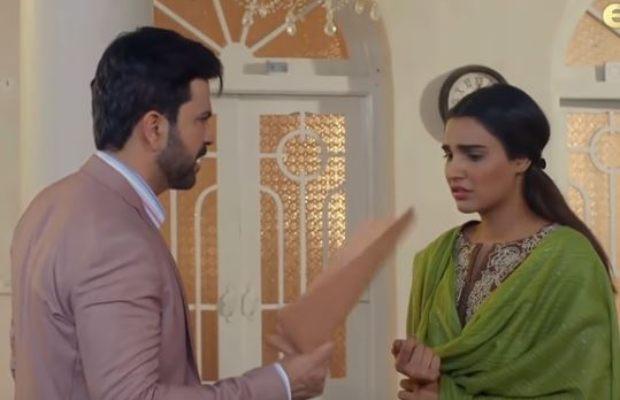 Express TV’s Ek Jhoota Lafz Mohabbat is a drama serial with a very problematic narrative. The ugly theme of sister rivalry is too hard to digest. In the previous episode, we have seen that Areesha is forcing Maaz hard to divorce Aleeza but she failed. In this episode, it is shown that Maaz himself is reluctant to divorce Aleeza.

Aleeza is waiting at a bus stop and she is lost in calculating her expenses and her possible salary when Maaz sees her standing there. He forces her to sit in his car. Aleeza is not ready to listen to him but then she sits in his car. Maaz seems concerned about Aleeza he is asking her why she is standing here on the road.

Maaz’s character is not making any sense at all. He, on the one hand, is not ready to give up on that toxic Areesha and on the other hand, it seems that his heart still beats for Aleeza, he cares for her and he is still reluctant to divorce her. Maaz offers Aleeza some money and also tells her that she does not have to look for a job but Aleeza declines his offer and clearly tells him that now she has no rights on her.

Aleeza is really worried about her expenses and the nurse she hired for her mother neglects her mother badly and eventually, she has to fire her. Aleeza is recalling Saad how he tried to help her out by giving her his sister’s number and suggesting she teach online. In dire need, she calls Saad and asks her to resend her sister’s number and details. Saad is so nice he tells her that he knows she has called her in need she does not want to call her, he says he prays she will never be in such need ever again.

Aleeza’s mother miraculously gets back into her senses. Maaz receives a stamped paper which seems like Khula papers which I do not think she has sent him because we have not seen her sending those papers if she has not sent those papers then has Areesha done that which is actually not possible its so absurd! Maaz gets disturbed after getting those papers, he straight away goes to Aleeza’s house where he finds that her Mami has regained her senses and despite the toxic neighbors’ accusations, Maaz listens to his Mami who says that her daughter’s character is spotless and so is her loyalty. Maaz feels happy to see Mami is out of an insane state and it seems that he is even happier to hear Aleeza’s character validation. Why Maaz is still holding Areesha if he still cares for Aleeza and he is not ready to divorce her?

tweet
Share on FacebookShare on TwitterShare on PinterestShare on Reddit
Rameeza NasimJanuary 5, 2022
the authorRameeza Nasim
Rameeza Nasim, a Paralian, passionate about poetry, drama and fiction. By giving drama critiques I feel like I am endorsing the writer's message to the audiences, I love my job. Being a critic responsibility lies on my shoulders to point out the flaws and shortcomings of the play be it on writer's , performers or director's end . I did my Masters in English Literature and Linguistics .
All posts byRameeza Nasim