There is no shortage of absurdity on display here 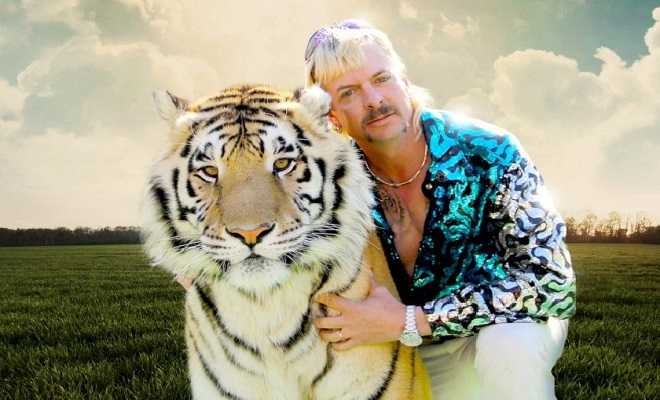 Tiger King…what is all the fuss about?

Even considering the bizarre times we live in, this docuseries is all kinds of absurd. This is a story of Joe Exotic. A proudly gay, polygamous, gun-toting, tiger loving, mullet sporting country singer. His fight against Carole Baskin, a self-styled conservationist for big cats is the main focus of the show. But boy do we get de-tours.

You can’t write characters like Joe Exotic. It is like he is actually a fictional character built. Every time the show needs a bit of a thrill, Joe delivers in a spectacular manner. The fact is Joe has no beliefs except one, “I am a star”. The man craves fame. The centre of his own universe. When a documentary maker (ages before Netflix) approaches him to put a light on his life, well, isn’t just life so beautiful was his response?

He is in charge of a park which is home to 227 tigers at one point. Yet he claims that people are here to see him. He uses the money earned by selling tigers to “marry” not one but two young boys, who the whole zoo knows aren’t gay.

His decisions are all designed to elevate his own status. Unlike his mentor Doc Antle (a more refined zoo owner) who hires women of a ‘certain kind’, Joe hires people who have hit rock bottom in life and have nowhere else to go. The aim clearly is to make him look like the “king” of this jungle and attain unwavering loyalty. All in all Joe Exotic wants to see himself as this king but is deeply insecure about life. Hence, from his “tiger collection” to “political campaigns, everything is seen as a performance to build his brand

Then there is Carole Baskin. Is she this noble crusader against the abuse big cats suffer at parks like Joe’s? Well, may be maybe not. Also may be she killed her second husband or maybe not. May be she once was the same type of person who she hates now with such vigour. Is it because it suits her business model now? She does treat her employee a bit better than Joe but that is a pretty darn low bar. Her constant updates and social media persona tells us she is also quite keen to build a profile of her own. It’s a little more refined than Joe. She is also pushing Congress to pass a Big Cat Safety Bill. The kind which would deprive the likes of Doc Antle and Joe Exotic off their kingdoms. Hence the hate, vigorous, untethered hate for each other. Carole took the legal and social shaming route, Joe Exotic, became a hateful troll and hired a hitman to kill Carole.

In between, we hear in fact almost see a suicide of Joe’s 2nd husband (CCTV’s placement just off for the docu makers). The Doc Antle aka Bhagavan running a cult with women worshipping him in all ways possible. Two other notorious business partners, who dug the hole for Joe. Two political campaigns as a Libertarian, one for President and one for Governor just to bring more business (Like the Donald I suppose).

Everything is absolutely batsh*t crazy. Perhaps all these people hate each other as much as they love themselves. At one point they were wishing the other was dead. Next minute they are happy to collaborate just to pull the third one down. Very little makes sense yet you can’t take your eyes off these horrible, human beings.

There is oddly a lot of focus on non-Tiger King things. Also, the documentary has been spiced up with some extravagant (read: unnecessary) storylines. Given that many of these characters were bending over backwards to get fame, it seemed odd that directors still felt the need to further dramatize things. However, it doesn’t become distracting, partly because it just adds to the overall theme of Tiger King (absolute mayhem).

There is an argument to made that the documentary directors Eric Goode and Rebecca Chaiklin are exploiting the insecurities of these individuals.  But given the actions of almost all the individuals involved, I have little sympathy for any one of them. Just a story of a bunch of bad dudes n gals.

Generally, this could be categorised as a decent watch. In Coronavirus times, I’d say it is a must-watch.