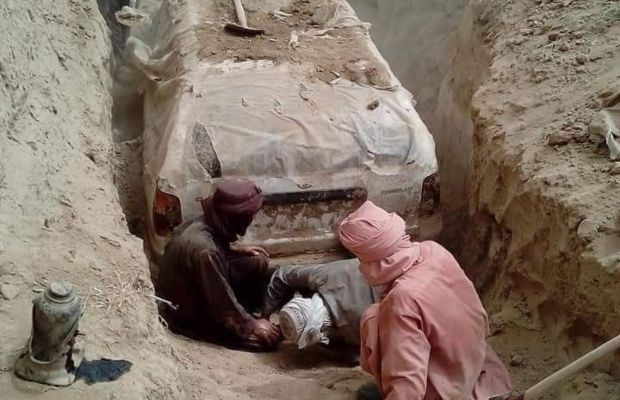 The Taliban recovered the personal vehicle of their former emir, Mullah Omar, which had been hidden underground for years.

According to media reports, Mullah Omar’s buried vehicle was recovered from Zabul province which was hidden by the Taliban.

Toyota wagon was used by the late emir to travel from Kandahar to Zabul province during the start of the US-led invasion.

Toyota Wagon belonging to the founder of the Islamic Emirate of Afghanistan, late Mullah Muhammad Umar Mujahid has been dug up and will be cleaned. This Toyota wagon was used by the late Amir to travel from Kandahar to Zabul province during the start of US led invasion. pic.twitter.com/rvEPuvrpxD

Afghan Taliban spokesman Qari Ahmad Yousaf has confirmed that the vehicle has now been removed from the ground and it is possible that Mullah Omar had traveled from Kandahar to Zabul in the same vehicle which was hidden underground.

A foreign media report cited that Mullah Omar’s personal car was hidden underground after the US invasion of Afghanistan after 9/11.