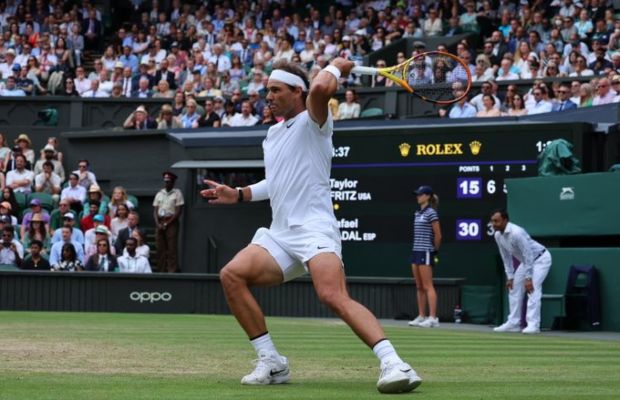 Nadal defeats Fritz in an epic battle | OyeYeah News
0Share
92Views
Rafael Nadal has defeated Taylor Fritz to advance to the men’s semifinals at Wimbledon!
Wednesday afternoon at the Center court at Wimbledon saw Rafael Nadal and American Taylor Fritz locked in an epic battle in the quarterfinal, with the Spanish tennis legend grinding out the victory.
Rafael Nadal managed to survive an injury and his opponent and made a come back in the tie breaker 5th set to beat Taylor Fritz 3-6, 7-5, 3-6, 7-5, 7-6(4) to reach the semifinals at Wimbledon for the 8th time.
After four hours and 20 minutes, Rafael Nadal defeated Taylor Fritz to advance to the men’s semifinals.
He will be playing his 38th Grand Slam semifinal against Nick Kyrgios on Friday.
That’s 19 straight major wins for Rafael Nadal, the second-longest streak of his major career!
For Fritz, It was the furthest he had ever gone in a Grand Slam singles event.
He made the fourth round in the Australian Open earlier this year in January.
Rafael Nadal after the match said: “I enjoy a lot playing these kinds of matches in front of you guys. It’s been a tough afternoon against a great player. Credit to Taylor he has been doing great all season. For me, it’s not an easy match so it is great to be in the semi-finals”.

tweet
Share on FacebookShare on TwitterShare on PinterestShare on Reddit
Saman SiddiquiJuly 7, 2022
the authorSaman Siddiqui
Saman Siddiqui, A freelance journalist with a Master’s Degree in Mass Communication and MS in Peace and Conflict Studies. Associated with the media industry since 2006. Experience in various capacities including Program Host, Researcher, News Producer, Documentary Making, Voice Over, Content Writing Copy Editing, and Blogging, and currently associated with OyeYeah since 2018, working as an Editor.
All posts bySaman Siddiqui