Will Afroz succeed in her intent to reunite Bilal and Sara? 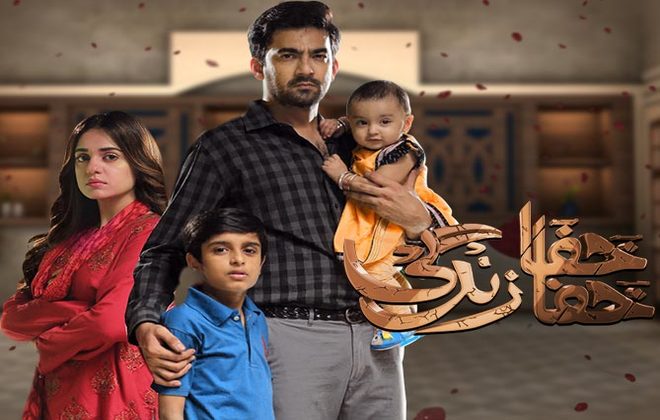 Sadia Jabbar Productions is known for the quality of their content and exceptionally unique real life stories, one such master piece by them is Khafa Khafa Zindagi that goes on air every Wednesday at 8:00 PM on APlus TV. The drama is written by Kifayat Rodani and directed by Asim Ali.

The lead is being played by Ali Safina (as Bilal) and Sumbul Iqbal (as Sara). The story is about love marriage that leads to divorce after some financial crises and the limited patience they both hold for each other. Little did they know that this decision will seriously affect their two kids Gulzar and Khirad; the drama beautifully portrays how a little interference from both sides of families (mothers of both) can turn a simple situation to destruction of marriage.

Sara lands a job where Bilal’s friend ‘Abid’ happens to be her manager. Sara and Abid get into some conflict during a work project. Abid insults her and Sara leaves the job. So the latest episode of Khafa Khafa Zindagi reveals that Abid comes to Sara’s home to seek her apology. Sara’s mother welcomes him warmly and convinces Sara to listen to him. Abid requests Sara to join her job again as he feels sorry for his behavior, Sara agrees to him.

Rameen (Bilal’s colleague and Sara’s friend) comes to Bilal’s home to show her guilt for her carelessness towards Khirad, due to which Khirad fell ill. Bilal accepts her apology as he has insulted her a lot earlier. Rameen offers Bilal that she will baby sit Khirad during his meeting with client, Bilal reluctantly allows her since he doesn’t trust her anymore.

Afroz (Sara’s youngest sister) goes to Bilal’s home to meet Kids but she sees that Bilal’s sister mistreats Gulzar, she couldn’t tolerate that and after some heated arguments with Bilal’s sister, she talks to Bilal’s mother and informs her that she intends to marry Bilal. Gulzar listens to her and gets angry as he thinks Afroz comes to them for ulterior motive. Afroz tries to explain him but Gulzar doesn’t pay attention to her. Bilal’s mother and sister think that Bilal has approached Afroz for this. Bilal clarifies but both don’t listen to him to which Bilal calls Afroz and asks her to abstain.

Abid’s inclination towards Sara increases and Abid comes to drop Sara home. Afroz inquires about him and informs her that she has talked to Bilal’s family about her own proposal for Bilal. Sara doesn’t take her seriously and thinks Afroz is doing it on purpose so Sara could refrain from divorce and return to Bilal. Sara who was taking Afroz lightly, comes in shock when Bilal’s mother calls and insults Sara’s mother.

All in all the latest episode of Khafa Khafa Zindagi was a decent watch; the drama is surely turning to some climax in upcoming episodes. Will Afroz succeed in her intent to reunite Bilal and Sara? Will Rameen take care of Khirad or is there some hidden motive behind her kindness? For more updates, stay tuned to APlus TV and do share your thoughts about the latest episode of Khafa Khafa Zindagi.

tweet
Share on FacebookShare on TwitterShare on PinterestShare on Reddit
Saman SiddiquiDecember 19, 2018
the authorSaman Siddiqui
Saman Siddiqui, A freelance journalist with a Master’s Degree in Mass Communication and MS in Peace and Conflict Studies. Associated with the media industry since 2006. Experience in various capacities including Program Host, Researcher, News Producer, Documentary Making, Voice Over, Content Writing Copy Editing, and Blogging, and currently associated with OyeYeah since 2018, working as an Editor.
All posts bySaman Siddiqui